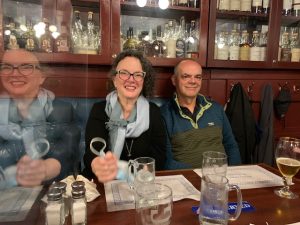 I honestly couldn’t tell you the difference between New Brunswick, Canada and New Brunswick, New Jersey when I first met Heather MacDonald-Bossé oh so many years ago at Canada Media Marketplace in Manhattan. Sure, I had written regularly on the Atlantic Maritimes, but Nova Scotia had the legendary Cape Breton, Newfoundland was home to the fjords of Gros Morne National Park, and PEI was known for its red cliffs, Anne of Green Gables, and an island long bike trail, the Confederation Trail. New Brunswick to me was just an extension of Maine and didn’t seem so intriguing. Yet, Heather’s love of her province was more than just a job dealing with North American media for Tourism New Brunswick. It was her passion. Knowing my fondness for the outdoors, she quickly persuaded me to come sea kayaking at Fundy National Park, walk Hopewell Rocks, go whale watching out of St. Andrews, and eat as much lobster as I wanted in Shediac. I had a memorable week of touring New Brunswick and wrote several stories from my experience. And for most travel publicists, that would have been it. They did their job convincing me to come and I produced a story or two.

But Heather was not your ordinary travel PR professional. She exuded warmth and would share everything with me about her life; her two daughters, one a successful writer, the other a skilled doctor, and her husband, Don, a highly regarded professor of music. She would send me the published short stories from her daughter, a photo of Don with none other than singer Geddy Lee from the rock band, Rush, after winning a teaching award. Share her love of the Boston Bruins and her good friend, the former coach, Claude Julien. In return, I opened up about my life and she remembered everything. “You’re a Red Sox fan, Steve? Why not come back to New Brunswick and fish the Miramichi, Ted Williams favorite place to fish.” Done. “Steve, you haven’t hiked yet on Grand Manan Island, one of the most serene spots in the province.” Okay. “Steve, I know you savor good food and drink. Why not forage for chanterelles with a French-trained chef on the Acadian Route, then have her cook a memorable meal.” Sold!

I would return to New Brunswick over a half-dozen times, almost every other year, whether on a snowmobile from Maine or on a private jet from Logan Airport. I would go solo, bring my wife, or close friends. Heather would always meet us on every one of those trips to grab a craft brew with me in Moncton, have dinner in Saint John or St. Andrews, or have me over to her house in Fredericton. When I heard of her illness last fall, I made the drive out to Fredericton to see her one last time. Facing the inevitable, she still had that sparkle in her eye, still exuded love, and made damn sure I would return home with stories to write.

So Heather MacDonald-Bossé, I raise a toast to you, taken from us far too early this past Sunday, from the same dreaded disease that took my mom prematurely. Thank you for being the consummate professional and rewarding me with a lifetime of memories and stories to tell. But most importantly, thanks for touching my heart. Yes, I will return to Fredericton to finally go to the Harvest Music Festival and see Don’s band perform. And yes, I will continue to write stories about your beloved New Brunswick.

25 comments on “Heather MacDonald-Bossé, In Memoriam”