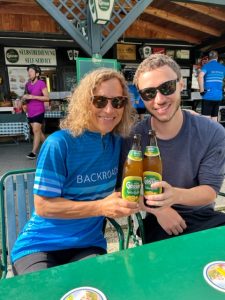 Today, we couldn’t pass up one of the rare opportunities to bike from one capital city to another, in this case Vienna to Bratislava. Actually, Lisa wouldn’t let me bow out of this ride early, because her mother was born in Vienna and her grandmother was born in Bratislava. So even though it was called the Iron Curtain Ride, we called it the Fried Roots Route for her mother’s family. Most of the riding was relatively level through bucolic countryside and forest, primarily on one of the EuroVelo trails that crisscross the continent for bikers. We stopped at a small snack bar for yes, our last radlers, and yummy cherry strudel, before continuing to our glamorous lunch spot, Schloss Hof, an 18th-century country estate established by Prince Eugene of Savoy. The gardens are still a wonder to walk, replete with resident camels, llamas, horses, and mountain goats. 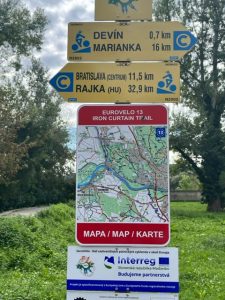 Then it was on to Slovakia, crossing a small bridge where a memorial was dedicated to the people who died trying to escape communist rule in hopes of finding freedom in Austria. We pedaled past old castle walls before hitting the city and snaking along the Danube to where our trusty home for the week, the AmaLea was waiting. A nice 46-miler with relatively little elevation, 900 feet, and a great way to end the close to 160 miles of biking we did with Backroads over the course of the trip. 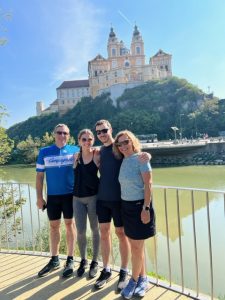 Day Four of our Backroads Danube River Cruise started with a short 13-mile warm up along the river on bike trails. Then it was off to see the impressive Melk Abbey perched on a hill atop the small town, looking more like a palace with its large courtyards, countless rooms, and vast book collection in the library. The 23-mile afternoon ride was arguably the best of the trip, along the Danube in the heart of the Wachau Valley of Austria. Leaving Melk, terraced vineyards started to rise along the river, soon joined by the stone ramparts of forgotten castles. The ridges only got higher and soon small towns dotted the shoreline with their ubiquitous steeples piercing the clouds above. It was hard to bike because you wanted to stop repeatedly to take another photo better than the last. 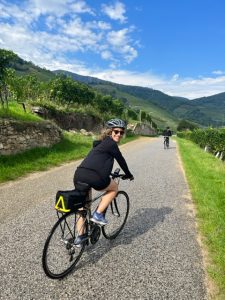 It started to drizzle when taking a short ferry across the river. Soon we were biking straight through the vineyards, looking at the vines overflowing with fat grapes. We arrived in the small Medieval town of Durnstein, where we relaxed outdoors overlooking the vineyards at Alter Kloster Keller. We wisely chose to grab a bottle of their local Gruner Veltliner and an oversized charcuterie plate packed with local pates, sausages, hams, and cheeses. Perhaps we lingered a bit too long because when we got back on our bikes, the clouds were ominous and it started to pour. Five miles later, we arrived back at the boat drenched, only to find our fearless trip leader, Malcolm, hosting a party under a tent in a torrential downpour for all of us wet bikers. We drank shots of Schnapps and glasses of Riesling while listening to a soundtrack that featured, “It’s Raining Men.” Memorable! 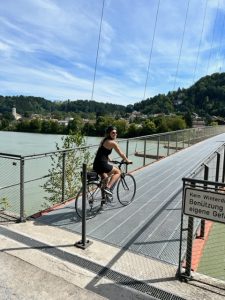 One of my top biking days of the trip, Day Two with Backroads was a 27-miler with 1600 feet elevation that you felt as soon as you climbed one long hill that crested the ridge. But then you were on top of the world for most of the ride, biking past fields of sunflowers and seeing the mountains of Germany, the Czech Republic, and Austria in the distance. We would pass small towns where roosters and geese came to greet us before biking over a small bridge into Austria for lunch and yes, another radler. That afternoon, we would bike on a trail alongside the gentle slope of the Danube before arriving at the college town of Passau. A sweet ride enveloped in fields of green. And the weather couldn’t be better, warm and sunny in the 70s.