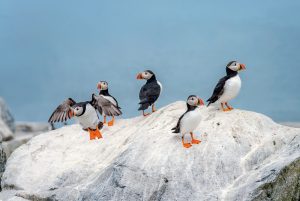 Blame it on the beak, a multicolored spectacle where orange and yellow stripes jut from the base of black. Or perhaps it’s that adorable plump body that resembles a petite penguin. Whatever the reason, the Atlantic Puffin has received top billing. Just ask Coca Cola who gave the bird a starring role in one of its most successful commercials as it struggles to crack open a bottle of Coke, urged on by a family of polar bears to use that legendary bill. This surge in popularity has had a regional effect, says Captain Andy Patterso, skipper aboard the 40-foot boat, the Barbara Frost. Come summer, Patterson make the almost daily jaunt from Cutler, Maine to Machias Seal Island, the southernmost nesting grounds of puffins on the east coast.