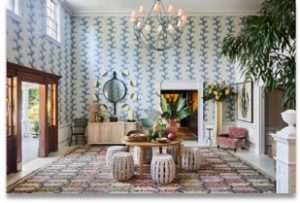 Listen to the church bells ring from the nearby green and you might feel that the village of Washington, Connecticut, has changed little since the time of its namesake, George Washington. Well, that is, until you enter the foremost accommodation in the region, The Mayflower Inn, and see the fantastic new redesign. The exquisite country retreat set on 58 private acres and now part of the Auberge Resorts Collection, recently debuted a striking new interior thanks to New York-based designer Celerie Kemble. The entirety of the Inn’s century-old main house has a vibrant new color palette, including pastel pinks and greens to flowery drapery. Also of note, acclaimed chef April Bloomfield joins the property as chef-in-residence this fall. The James Beard award-winning chef will oversee all dining outlets at the Inn through the end of 2020, including the hotel’s new restaurant, The Garden Room, featuring a four-course tasting menu offered Thursday through Saturday evenings. Before dinner, stroll the grounds, dotted with stone walls and a running stream, and you’ll feel like lord of the manor.

Please let ActiveTravels know your dates and we’ll be happy to check availability and pricing! 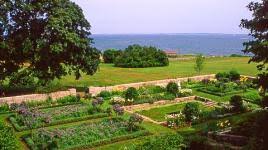 Connecticut’s extensive network of Blue-Blazed hiking trails weave across relatively flat terrain, creating one of the best walking systems in the Northeast. The trails are all inland, through forests of maples, oaks, and birches. However, there are several coastal walks not associated with the blue-blazes that are worthy of a visit like the 234-acre Harkness Memorial State Park, a gem in Waterford. Bequeathed to the state in 1952, the 42-room Italianate mansion, manicured lawns and gardens are a perfect place for a stroll or picnic. Tour the house and then head outside on small stony paths that snake through the gardens. In May, this is quite a treat with many of the perennials in bloom. The great expanse of lawn slopes down to the shores. In the summer, a concert series brings well-known performers to the grounds.

This entry is excerpted from my latest book, New England in a Nutshell. The book/ebook is slated to published on July 2nd and you can pre-order now at Amazon or at the independent bookstore, Northshire, located in Manchester Center, Vermont and Saratoga, New York. The ebook includes all hyperlinks to listings. The paperback includes front and back cover illustrations from Manhattan-based artist, Sarah Schechter, and a small sampling of photos from Lisa Leavitt, who accompanied me on many of my assignments, resulting in published work for the Boston Globe. 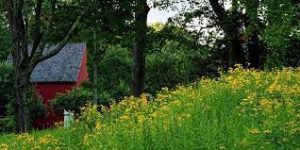 When New York City collector Erwin Davis became obsessed with a painting owned by artist Julian Alden Weir, he gave him an offer that was hard to refuse. In exchange for the painting and ten dollars, Davis would transfer over the deed to a 153-acre farm less than an hour outside of New York in the Connecticut countryside. Weir arrived in the summer of 1882, immediately became enamored with the sylvan setting, and painted the first of hundreds of works he and his friends would create over the next 40 years. To this day, the property remains a rural retreat that continues to inspire artists and is now the only site in the National Park System dedicated to American painting. Walk inside the Visitor Center to see a short film on the life J. Alden Weir, considered one of the fathers of American Impressionism. That’s not to say he wasn’t disgusted with this style of painting when he first encountered it in Paris, calling an exhibition showcasing the works of Monet, Manet, and Degas “worse than the Chamber of Horrors.” Yet, soon enough, Weir was utilizing the loose brushstrokes and plein air painting that would become the trademarks of Impressionism.

View the wonderful photographs of Weir with John Singer Sargent and Childe Hassam, two of the celebrated artists that enjoyed visiting Weir at his country home, and see the lone original work in the building, The Truants (1895). Then immerse yourself in the same natural setting that inspired Weir. Trails lead to a pond, barns, old stone walls, a sunken garden, and his house and studio. Better yet, bring a sketchbook.

This entry is excerpted from my latest book, New England in a Nutshell. The book/ebook is slated to published on July 2nd and you can pre-order now at Amazon. The ebook includes all hyperlinks to listings. The paperback includes front and back cover illustrations from Manhattan-based artist, Sarah Schechter, and a small sampling of photos from Lisa, who accompanied me on many of my assignments, resulting in published work for the Boston Globe.