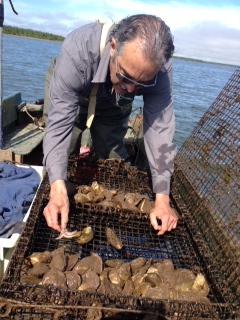 Last May, I was fortunate to drive New Brunswick’s Acadian Coast for an upcoming Boston Globe story. Stretching 110 miles from Shediac to Caraquet, the northeastern coast of New Brunswick boasts the warmest waters north of Virginia, the sand dunes of Kouchibouguac National Park, lonely lighthouses on Miscou Island, and the largest lobster processing facility on the continent. Yet, the real reason folks go out of their way to venture to the Acadian Coast is to experience the French Canadian culture. Stop at any of the small towns and you’ll notice a distinctive joie de vivre, with foot-stomping fiddle music, down-home French cooking accentuating the local seafood catch, and festivals that celebrate the Acadians’ 400-year-old history in the Atlantic Maritimes.
Yet, it was one day in Caraquet where I experienced my greatest culinary pleasure of the year. In the morning, oysterman Gaetan Dugas took me out on the waters of Caraquet Bay to show me firsthand why these oysters are a cherished commodity in high demand from chefs around North America. Especially the petites, small oysters that are both succulent and briny. Dugas’ ancestors include a pirate who commandeered a ship against the British in the 1750s, but it’s his father who taught him how to oyster farm and his grandfather who taught him the traditional ways of the local Mi’kmaq people.
Just as bountiful as the sea are the forests surrounding Caraquet, ripe with morels, chanterelles, oyster mushrooms, and other goodies like the foot of the cattail. Local Jean Patenaude made a name for himself scouring the countryside for edibles, bringing home laundry baskets full of wild mushrooms on ideal days in summer. In the afternoon, he took me foraging for morels.
That evening, I assembled the goodies I had collected that day and brought them to chef Karen Mersereau, the mother of gastronomy in Caraquet. Mersereau was a food marketing rep in Toronto when she met Gerard Paulin, the third-generation hotelier of Hotel Paulin, a Victorian-era gem perched on a hill above the water of Caraquet Bay. A dozen years later, the couple are parents of a boy, Jules, and Karen is firmly entrenched at the helm of the hotel’s kitchen. She has wisely aligned herself with both Dugas and Patenaude.
Mersereau took my day’s bounty and created a memorable wild mushroom oyster bisque. To ensure that every spoonful was chockful of meat, she throws in the native palourdes clam, similar to a quahaug. Her bevy of local supplies would make most chefs weep with joy. In addition to oysters and mushrooms, there’s snow crabs, tuna, Atlantic salmon, shrimp, and halibut right off the boat, goat cheese and spring-fed lamb found in nearby farms, and blueberries and cloudberries that grow wild along the coast, perfect for making a sublime pie. At Hotel Paulin, the locavore movement has reached its crescendo.

One comment on “Top 5 Travel Experiences of 2012, A Culinary High in Caraquet, New Brunswick”