Time to Party With Bonhomme at Winter Carnival 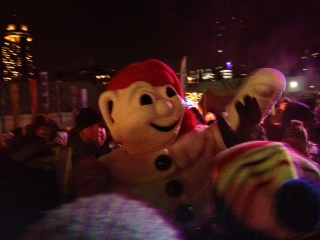 If you love Paris in the springtime, then you’ll adore Quebec City in the wintertime, where, for 17 days, the party never stops. Quebec City’s Winter Carnival is the largest in the world, attracting more than one million people. I was one of those fortunate people to arrive in this fortified city on the first day of the 2013 Winter Carnival. I spent the morning sledding down an ice chute, viewing the impressive ice castle, made from 1600 blocks of ice, eating maple syrup on snow, and playing a human game of foosball. Attached to bars with seatbelts, you slide all over the ice trying to kick the ball into the goal. But the party really started on Saturday night, when top DJs from Montreal and Toronto played a mesmerizing mix of hip-hop and electronica to a crowd of revelers outside the ice castle. Locals carry cane-like red sticks filled with a potent drink called Caribou, made of whiskey, red wine, and maple syrup, which certainly added to the dancing frenzy. When Bonhomme, the popular snowman and revered host of the festivities started to boogie, the crowd went wild.
This is just the start of the 58th edition of the Quebec City Winter Carnival. Still to come is Le Grande Virée, a dogsled race that cruises through the heart of the historic Old City, and the ice canoeing competition, where paddlers sprint across the turgid waters of the St. Lawrence Seaway. New this year is a video installation, where filmmakers project images onto four of the iconic buildings in town, creating a 3-D interplay. There’s also a brasserie, serving 25 microbrews from across Quebec. So if you have no plans yet for February vacation week, it might be the time to experience some joie de vivre in Quebec City.