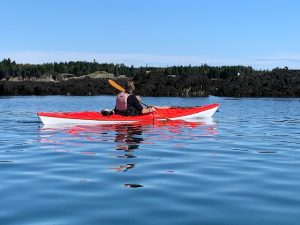 One look at Bruce Smith’s effortless stroke paddling in the waters that slope down from his home base in Deer Island and you immediately know you’re in good hands. The owner of Seascape Kayak Tours has a fluid turn of the arms, feeling almost Zen-like with the surroundings. And wow, what a playground he gets to kayak, the granite-studded, pine-laden islands in Passamaquoddy Bay, the large body of water that separates New Brunswick and Maine. This is Smith’s 28th year in business, first starting in St Andrews before making the wise move to Deer Island. The remaining 8 months of the year, he leads sea kayaking and hiking trips off the Nicoya Peninsula in Costa Rica.

We took the short ferry to Deer Island from the New Brunswick mainland, geared up, got cozy in our double kayaks, and within 5 minutes we were so close to harbor seals, you could hear them breathe. The waters were serene, with sunlight shimmering on the light surf. The next 4 hours were a magical blur as we could also hear porpoises breathing as pods swam by, arching their backs in and out of the water; paddled past historic circular herring weirs and more modern Atlantic salmon fishing farms; followed a family of great blue herons along the boulder-strewn shoreline; found a mink with a fish in his mouth atop a seaweed covered rock; watched both harbor and gray seals pop their heads out of their waters and look at us in disbelief, like “What are you doing here?” and stopped for a lunch of ripe red rose hips on a deserted beach. All the while we paddled in little surf around quiet islands with no boat traffic. None. When I asked Smith where all the recreational boats were on this blissful weekday morning, he noted that many boaters are spooked by the Bay of Fundy tidal shift, the largest in the world. I would be too! One minute you’re in deep ocean waters at high tide, the next your boat’s docked on the ocean floor, nowhere to go. But for the sea kayaker, this is sheer bliss.

I want to thank Neil Hodge at Tourism New Brunswick for designing a fantastic trip this week. I’d also like to thank Canada for opening its borders to Americans. It was a joy to get away to savor the scenery, adventure, fresh fish, and craft beer of New Brunswick.