Most Memorable Trips We’ve Designed This Past Decade: Sunshine and Ian, South America 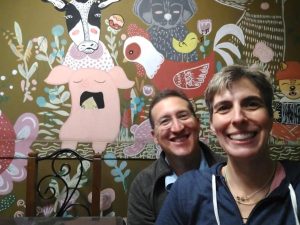 May 2022 marks the 10th anniversary of ActiveTravels. Over the past decade, I’d estimate we’ve designed close to 2,000 trips. Some of those itineraries followed the fall foliage route in New England, others followed the orangutans of Sumatra or the gemstones of Estonia. We’ve designed itineraries to 116 countries and probably all the American states and Canadian provinces. Of those many trips we’ve had the privilege to work on, there were ones that were quite a challenge and incredibly rewarding to design.

When someone calls asking you to plan the first 4 months of their yearlong travel-around-the-world sabbatical, you immediately feel like that kid at the country store with brown paper bag in hand ready to grab as many Red Hots and candy necklaces as possible. Sunshine and Ian would eventually head to Hawaii, Australia, and SE Asia, but my job was simply to focus on the first third of the year in South America, September through December 2018. Peru was by far the most complex nut to crack, with its vast size and diverse terrain. But we managed to get them across the country—Lima, Cuzco, Sacred Valley, Machu Picchu, Lake Titikaka, Arequipa/Colca Canyon, Nazca, Trujillo, a yoga retreat in the rainforest outside Tarapoto, and a Treehouse Lodge overlooking the Amazon. 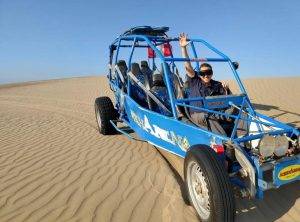 Then it was on to Bolivia to visit La Paz, the drive down the world’s most dangerous road, Yungas Road (40 miles, 11,800-foot descent), the charming college town of Sucre, and the Uyuni Salt Flats. Next up was Ecuador with stays in Quito, Cotopaxi, Otavalo, a weeklong cruise in the Galapagos Islands, and a final stop in Cuenca. Last destination was Colombia to see Bogota, the street art of Medellin, the coffee country of Armenia, a yoga retreat in Santa Marta, and finally resting on the beach of Cartagena. At times, they followed in my footsteps, using the exceptional guide I hired to see the city of Medellin. Other times, I followed in their footsteps, taking the same Abercrombie & Kent trip to Machu Picchu they did a year later. The best trips inspire me and few trips excited me more than this one!