Your Flight is Cancelled: What To Do Next 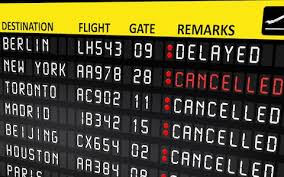 We arrived around 10 am at the Bangkok Airport with more than enough time to catch our first flight that day to Hong Kong, which would then connect to our Boston flight home. We checked the Cathay Pacific website before we left the hotel and our first flight was on time, as scheduled. But unfortunately, that wasn’t the case. We were told at airport check-in that our first flight had technical problems and would be delayed. There was no way we could make the connecting flight in Hong Kong and the next flight from Hong Kong to Boston would be exactly 24 hours later. Uggh.

Travel overseas, especially on a connecting flight and this same scenario is very likely to happen to you. You can jump up and down, pout, and say life’s not fair, or you can take a deep breath, pause, and try to get yourself home as quickly as possible in a relatively comfortable manner. We were lucky to have a great person at the Cathay Pacific desk in Bangkok working on our behalf. First and foremost, when an airline cancels or delays a flight due to technical problems, they are under contract to get you to your destination on any airline, not just the airline you booked. Cathay Pacific understood this and led us over to the British Airways check-in to try and catch the flight to Heathrow and on to Logan, but it was too late to get on the flight. He then brought up two other options, fly Lufthansa 11 hours later that day, connecting in Frankfurt, or fly Emirates through Dubai at 8 pm, arriving in Dubai at 1 am. We would then wait at the Dubai Airport until the 8 am flight to Boston the next morning. Neither was particularly appealing.
This is when you consult Google Flights or Kayak to ensure they are offering all options. Our son, Jake, found a 4 pm flight to Dubai on Emirates, which would get us into Dubai at 9 pm. Could they put us up in a hotel in Dubai that night so we could get a good night’s sleep before the 8 am flight to Boston the next morning? At first, the Cathay Pacific rep hemmed and hawed, but then agreed to get us on this flight and purchase the hotel room for the night. When we arrived in Dubai later that day, we realized he went one step further. An escort met us upon arrival and led us to an in-transit hotel located smack dab inside the Dubai airport. We didn’t need to go through Customs or even go through security again the next morning. All we did was wake up and walk to our gate. But none of this would have happened unless we first did our research, found the earlier flight, and asked for the night’s hotel. So if you’re ever in this same situation, remember to relax, do the flight research quickly, and be assertive.