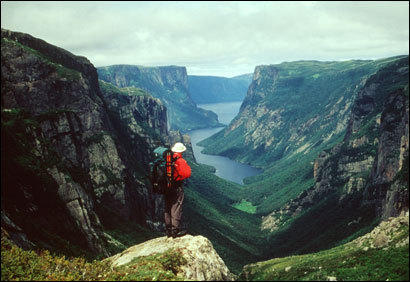 Nestled within Newfoundland’s Gros Morne National Park, a designated UNESCO World Heritage Site because of its unique combination of quartzite rock and wetland terrain, the Long Range Mountains could very well be the one of the last remnants of pristine wilderness within a three-hour flight of New York and Boston. Yes, wilderness, one of the most misused words in the English language. Any green space with a chunk of land the size of a suburban backyard seems to fit the bill. But here on Newfoundland’s western coast, a mere hour drive from the airport in Deer Lake, there are no roads, no power lines. The only sign of humanity tampering with the terrain was the dock we landed on.

This is a paragraph taken from a story I wrote on backpacking Gros Morne National Park that originally appeared in Backpacker Magazine. Now this spectacular park, a favorite of caribou and moose, is the setting for a three-day winter wilderness survival course run by Linkum Tours. Learn to build snow shelters, light a fire, and cross-country ski atop mountain ridges that overlook magnificent fjords. The course is being held from January through March, 2011.