WayGo is the Way to Go When Visiting China 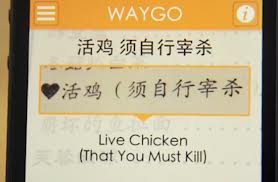 I’ll never forget that hellish taxi ride my brother and I took from the Bangkok airport to our hotel. After an exhausting flight, we drove aimlessly around town because the taxi driver couldn’t understand where we were staying that night. We pointed to our trusty guidebook but quickly realized that the driver had no idea what we were reading because the Thai have a completely different alphabet. It wasn’t until my brother neighed like a horse and pointed to the gold on a watch that the driver figured out where we were spending the night, “The Golden Horse.” I’m not a linguist, so translating other alphabets is, well, Greek to me. That’s why I was delighted to hear about the WayGo App that travelers are already using on their trips to China. Simply point your iPhone at any Chinese menu or street sign and it translates. No internet connection is necessary. Other languages are on the way, including Thai, hopefully.