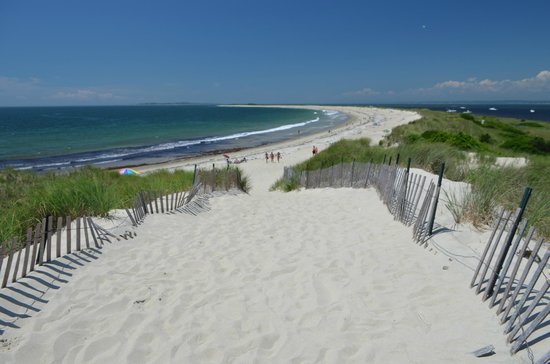 With its highest point being a mere 812 feet, Rhode Island is not a place most folks think of when they want to take a hike. Yet it does have some of the longest beach strolls in New England. Napatree Point juts out from the village of Watch Hill on a wild strip of coastline, offering views of Connecticut and Fishers Island, New York. Take off your shoes and listen to the waves as you saunter along the water all the way to the point of this crescent-shaped beach. The spit of land curves back toward Rhode Island, similar to how Provincetown lies at the tip of Cape Cod. Sailboats cruise Block Island Sound, ospreys and their young fly above the shores. As you reach the point and the last square foot of terra firma, the wind begins to howl, the surf seems a bit more ominous, and the sand is replaced by large battered rocks. On the return trip, you’ll be treated to a view of the Victorian houses that cling to the bluffs of Watch Hill.