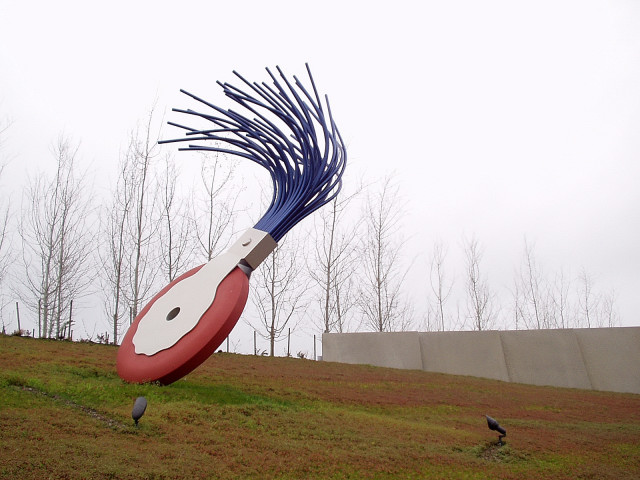 The curved rusted steel of Richard Serra’s Wake (2004) resembles the hull of a ship, perfectly suited for Seattle’s seafaring tradition. Children run around the large structure, warned by their parents not to touch. Other families meander by Calder’s tall, red Eagle (1971), eyeing the iconic Space Needle in the background. A dog walker ambles past one of Oldenburg’s signature typewriter erasers, following the zig-zag trail that rises above railroad tracks and leads to the waters of Puget Sound and the snowcapped peaks that stand tall in the horizon.

Unveiled in January 2007, Seattle’s Olympic Sculpture Park is a glorious addition to the city’s waterfront. It’s even more remarkable when you understand the history behind this 9-acre parcel of land.  For more than 60 years, this section of Belltown was dotted with oil tanks owned by UNOCAL (Union Oil Company of California). The petroleum seeped into the land creating a brownfield that would take over a decade to clean up when operations ceased in 1975. Yet, today, the once vacated industrial wharf is now brimming with life as more than a half-million people visited Olympic Sculpture Park in its first year.