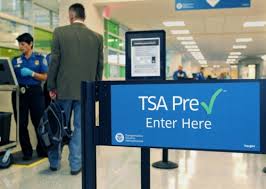 By now, you may have witnessed (and hopefully experienced) the beauty of being in a TSA PreCheck lane at airport security. In blissful pre-9/11 fashion, passengers in the PreCheck line don’t remove shoes, belts, or jackets, and have the luxury of keeping their liquids and laptops inside their bags. The standard metal detector is used instead of the invasive full-body scanner. On average, security agents can process twice as many passengers in PreCheck line than the normal lines.
Originally launched in October 2011, the program has expanded to 118 of the approximately 450 commercial airports in the US. New TSA centers are opening around the country to process applications at a cost of $85 for a five-year pass. In April, Air Canada was the first international carrier to sign on to the program. Of course, getting to your gate faster sounds great until you realize that being enrolled in PreCheck doesn’t guarantee you’ll always get to go through the coveted lane, since this is American bureaucracy you’re dealing with. Even after signing on to the program, you still might not be deemed trustworthy enough to get on every other flight.
To read why I prefer Global Entry, please click here.