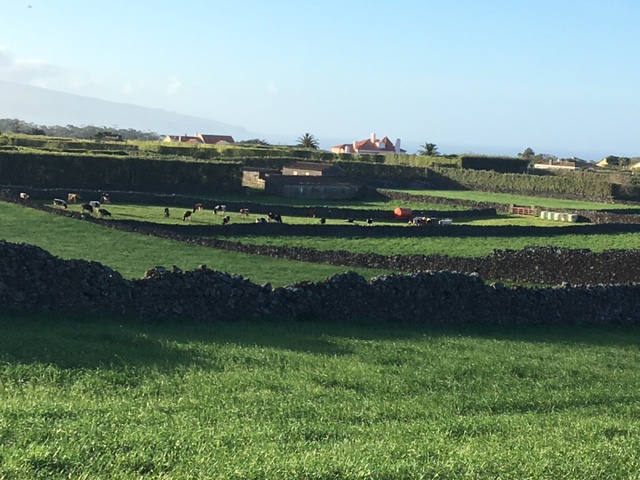 Steve asked me to write about my top travel Dream Day in 2017. That was a hard choice! I was lucky enough this past year to have had adventures in Colombia; all around the greater Toronto area; on Ontario’s Georgian Bay, Lake Huron, and Lake Simcoe; in Seattle and on Bainbridge Island; in Portland OR and throughout the Columbia River Gorge; in three US National Parks — Sequoia NP, Kings Canyon NP, and Yosemite NP; in Vermont; in Massachusetts; in New York; in Southern California and Sacramento; on Captiva Island, Florida; and at Niagara Falls.
But my top travel Dream Day of 2017 occurred in the Azores, on the island of Sao Miguel, the largest of the Azorean nine. For a week last February, I stayed with friends at Quinta Minuvida, a small eco-friendly, historic home turned hotel, run by the husband and wife pair Joao and Rimi. Quinta Minuvida grows and serves local food in the village of Rabo de Peixe, not far from the city of Ponta Delgada, which is a direct flight from Boston and Toronto. Within a five-minute walk are acres and acres of green grazing cows, cornfields, farmland, and old stone walls.
On my Dream Day, we had a simple breakfast of local bread and cheese, with several types of jam made from Quinta Minuvida’s fruit trees, followed by a "community" dual language yoga class, in Portuguese and English. Some of the Azoreans spoke no English, but we all laughed, stretched, balanced, and meditated together. After yoga, my group headed out for a hike, armed with picnic lunches. But, before hiking, Rimi and Joao put a pot of meat and vegetables into the ground, a “cozido nas caldeiras,” where it would cook for six hours via volcano steam (a true geothermal stew) while we were hiking. From the trailhead at Pico do Ferro, we overlooked Lagoa das Furnas (the Furnas volcano crater, filled with water) and the town of Furnas. After a very steep decline, we found mud-bubbling holes in the ground, plus old abandoned houses (fortunes made and lost during Sao Miguel’s orange plantation boom and bust). The next adventure was to a public hot springs called Poca da Dona Beija, in Furnas, for a calming soak. Lastly, we retrieved the cozido from the ground, and proceeded back to Quinta Minuvida to dig in. It was deliciously full of chicken, sausage, pork, beef (like brisket), cabbage, kale, carrots, and taro root (like potato). Azorean and Portuguese wine flowed.
ActiveTravels has sent three different groups to the Azores since my trip. If you are interested, please let us know. Rimi and Joao recommend avoiding July and the first few weeks of August due to the crowds, but, other than that, it’s truly a great destination to explore.