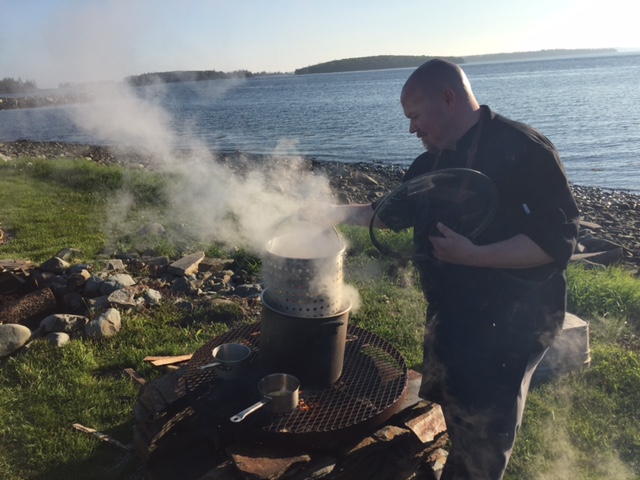 This past June, I took the Portland ferry to Nova Scotia with my sister, Fawn. This would be my fifth trip to the province and I wanted to focus on the southern half of Nova Scotia, south of Halifax. Over a week, we would stop in the charming seaside community of Lunenburg, one of only two cities in North America chosen as a UNESCO World Heritage Site, go clamming on Digby Flats, oyster farming at Eel Lake, stand-up paddleboard at the White Point Beach Resort, and spend a night at a quintessential Canadian property deep in the woods, Trout Point Lodge. But as I wrote in my original blog, the last day in Nova Scotia was downright dreamy.

A mere 30 minutes from where the Portland ferry arrives in Yarmouth is the 6-bedroom Argyler Lodge. The small inn sits on the shores of the vast Lobster Bay with spectacular views of the sea and islands. I would spend the rest of the afternoon exploring the wide open water with my sea kayaking guide, Matt Delong. Paddling a loop around the numerous islands—Nanny, Camp, Birch, Bonds, Potato, Gordons—we spotted ospreys in their nest, a loon plunging into the water, and cormorants drying their wings on their rocks. The most spectacular part of the whole adventure was the fact that there was not one boat in this mammoth-sized bay. Not even another kayaker. Lobster fishermen finish the season in late May so their traps and boats were long gone by the time we arrived in mid-June.
3 hours later, we returned to shore where Chef Jonathan, owner of the inn, was already busy boiling water over an open fire for our night’s lobster bake. A picnic table was set for my sister and I, Nova Scotian wine on ice. Jonathan soon dumped everything into the pot including corn, potatoes, clams, mussels, and lobsters. The sun set behinds Gordons Island as we roasted marshmallows for our s’mores. Then the bright night sky lit up with stars. Yes, dreamy and memorable.