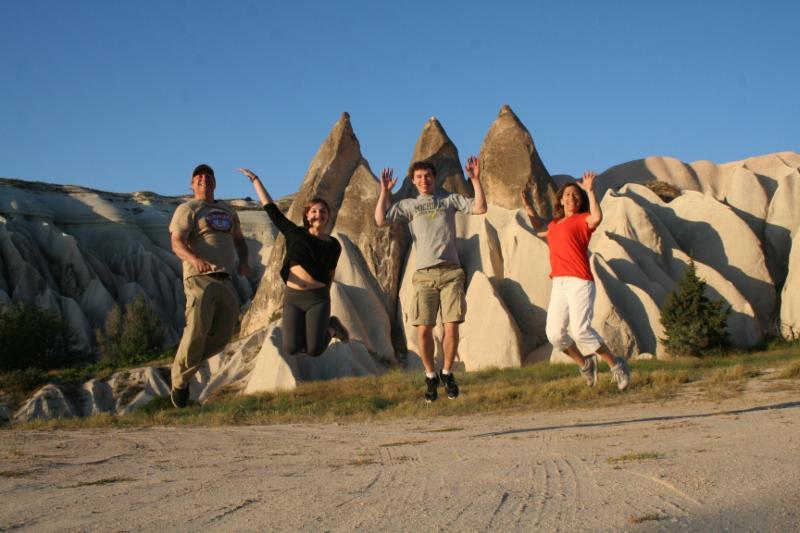 When Mount Erciyes poured lava over central Turkey thousands of years ago, the volcanic ash formed a surreal, lunar-like landscape consisting of cone-shaped “fairy chimneys” and layers of soft volcanic rock called “tufa.” Early Christians found the pervious terrain ideal for escaping persecution by Romans and Arabs. When wet, the tufa could be easily carved like soap to make caves out of the pinnacles as well as underground cities descending hundreds of feet below the surface. Tunnels were carved into the soft volcanic rock that venture a mind-boggling 7 and 8 levels underground. They lead to rooms that were used to sleep, eat, pray, along with advanced ventilation systems and a well to retrieve water.

This past July, Lisa and I returned with the kids to Cappadocia to revisit this otherworldly terrain. One of our favorite jaunts was a hike with guide, Mehmet Gungor, accompanied by his dog. We were all by our lonesome in the stunning Rose Valley, hiking in and out of caves. Early the next morning we took a magical hot air balloon ride over the terrain and then toured the underground cities. We rented a car our entire time in Cappadocia and it was easy to drive through this rural part of central Turkey. We made it to the mountain town of Güzelyurt, where we found more underground cities and churches from over a millennium ago. We never felt unsafe driving on the backcountry roads of Cappadocia. On the contrary, surrounded by spectacular scenery and very little traffic, it was a great part of the world to cruise.