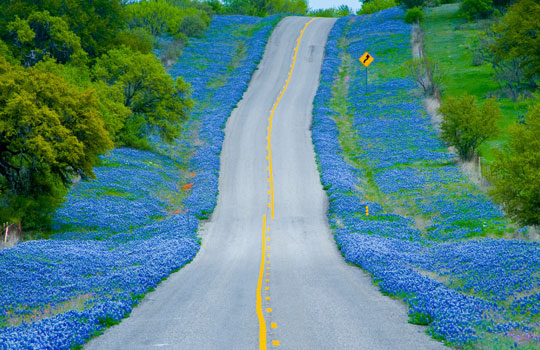 An hour west of Austin lies the Balcones Escarpment, a long geologic fault zone that divides Texas in half. Balcones is Spanish for “balconies,” an apt way to describe how the Texas Hill Country suddenly thrusts up from the gently rolling prairie to create limestone canyons. On lonely backcountry roads, you’ll be driving under tall cypress trees past large cattle ranches and fields of bluebonnets that are in bloom come April. Take US 290 west from Austin to Johnson City’s Wildflower Loop. Then be sure to tour the nearby LBJ Ranch in Stonewall, stop for bratwurst and a pint of Shiner Bock in the German settlement of Fredericksburg, go for a stroll on the pebble-strewn paths of the 5400-acre Hill Country State Natural Area, and listen to the next Willie Nelson at the legendary country music hamlet of Luckenbach. The homey Hoffman Haus B&B in Fredericksburg is a good place to rest your legs after a day of touring the region.