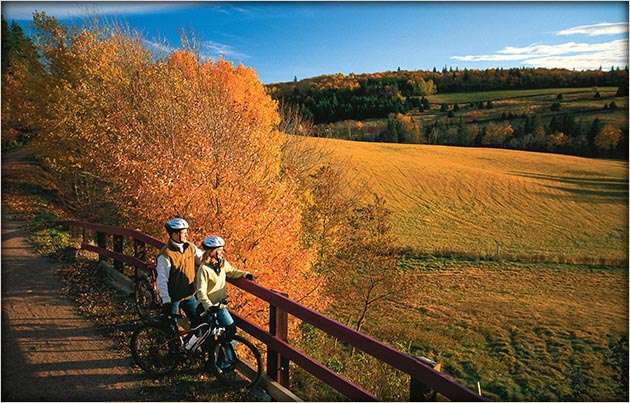 Take a chunk of Vermont and plop it down in the Gulf of St. Lawrence and voila, you have Prince Edward Island. This sylvan setting lends itself well to road biking, especially in the fall when the summer crowds are long gone and the maples provide a colorful backdrop. The Canadian Pacific railroad that once connected Prince Edward Island’s small villages last roared through the interior in 1989, leaving in its wake hundreds of kilometers of track. By 2000, the tracks were pulled and the line replaced with a surface of finely crushed gravel, creating a biking and walking thoroughfare called the Confederation Trail. Crossing the entire island, the trail starts in Tignish in the west and rolls 279 kilometers to the eastern terminus in Elmira. One of the most scenic stretches starts in Mt. Stewart in King’s County along the sinuous Hillsborough River. You’ll soon reach St. Peter’s Bay, a large inlet dotted with mussel farms and lobster traps. After crossing a bridge that rewards you with glimpses of the island’s fabled red cliffs, you’ll arrive at the rolling Greenwich Dunes, a perfect place to bring that picnic lunch. Stay at Inn at St. Peters, a favorite stopover in PEI for many of our clients.