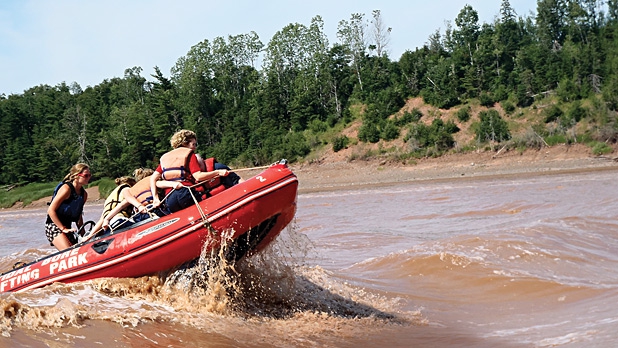 I had drinks last night with a group of hotel owners, restaurateurs, wine makers, boutique chocolate shop purveyors, maple syrup bottlers, and lobster suppliers in town from Nova Scotia. They were going on a culinary tour from Boston to Portland, led by one of my favorite people in the travel biz, Chris Miranda at Redpoint. They were here to hopefully gain inspiration from their cohorts on this side of the border. Not that they need it. I actually think Nova Scotia already has a lot more to offer than Massachusetts like a great public market and an award-winning wine region. They also served as regional ambassadors to Nova Scotia, now that the ferry is once again cruising from Portland, Maine to Nova Scotia this summer. I was asked by Chris to meet them for a drink and talk about the best ways to get press for their respective businesses.
While talking about Nova Scotia, I remembered one of my favorite outings in the province, tidal bore rafting. At high tide standing on a sandbar, we heard the deafening surge of water before we saw the white crest atop the wave. Then we jumped into a motored zodiac before the sandbar completely disappeared with the onslaught of water.
That’s when the excitement begins. The strength of the tide causes the flow of the river to shift directions and create standing waves. At first the waves were small, in the 5 to 7 foot range. Yet, as the water continued to pour in, the standing waves reached heights of 12 to 14 feet. We motored through as the succession of waves swamped the zodiac with the brownish mix of water. Thankfully the zodiac self-bails, so as soon as the water in the raft spilled back into the river, we would motor through another series of towering waves, getting soaked and laughing our asses off on each run. After about 30 minutes, the water reaches its high point and the waves subside. For an encore, we crawled up the soft muddy banks of the river and slid down on our stomachs. I loved every minute of it and ended up penning a story for Men’s Journal.