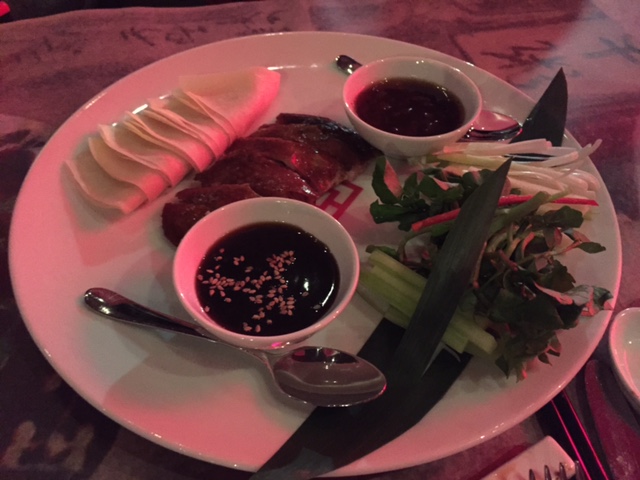 With its mix of intriguing ethnic choices, like the Cree food I sampled at Keriwa Café on my last visit, Toronto has always been one of my favorite food destinations. Having dim sum is always high on my list of priorities, but this time I didn’t head to Spadina Avenue. I checked out the latest offering from chef Susur Lee, Luckee, at the SoHo Metropolitan Hotel. Called one of the “Ten Chefs of the Millennium” by Food & Wine magazine, Lee became a media sensation on the Food Network’s Top Chef Masters and other hit show, Chopped. When he’s not in the kitchen, he’s out on the floor greeting clientele and agreeing to take selfies with fans.
His dim sum was the most memorable I’ve had in a long time. The ubiquitous har gow (shrimp dumplings) arrived orange thanks to a hint of butternut squash, on a bed of wild mushrooms. If my brother Jim was with me, we would have ordered 6 plates of these. Even his vegetable dumpling, something I rarely order, was a tasty mix of spinach, celery root, mushrooms, and jicama in a light as air dumpling. Lee excels at other dishes besides dim sum, like the sautéed scallops sweetened with soya glaze, and “Luckee Duck,” an apt name for the person who orders this version of the Peking Duck served with a schmear of foie gras. Susur, I’ll be back again for my selfie!
When a friend from Toronto recommended I visit the new America Restaurant on the 31st floor of the Trump Hotel in the Financial District, I was skeptical, thinking the place would be some Texan steakhouse offshoot. As soon as I stepped foot into the restaurant, I realized I was wrong. The vibe with subdued lighting is more New York supper club, circa 1940s, especially with the Ella tunes in the background. I sat on the comfortable banquette and dug into a foie gras pancake, a buckwheat pancake topped with a healthy dollop of the meat, chunks of peaches, peanut marzipan, and hot Canadian maple syrup. For entrees, the scallop jambalaya was served in a hot skillet, coupled with grilled octopus and Andouille sausage. It goes well with the Blue Mountain pinot noir from BC. Run by Oliver & Bonacini, the same people who brought you the award-winning Canoe, America is here to stay in Canada.
SIGNS, another new venture in town, seemed like a gimmick when I first heard about it. All the servers are deaf and you order the food via sign language. As a travel writer, I’m used to ordering my food though sign language since I spend a good part of my life in places where they don’t speak English. But the thought of putting deaf people on display made me uncomfortable. My worries were quickly allayed when I met my server, a young woman who helped me learn signs quickly like “thank you” and “what do you recommend?” A tip sheet is handed to you when you sit down at a table, sort of a Berlitz guide to sign language, where you can learn how to sign “I’m a vegetarian” or “we’re in a hurry.” My favorite was “Fantastic!” where you thrust your hands high in the air. “How was your entrée?” my server signed me, pointing to my lamb shank. “Fantastic!”