The Value of a Top-Notch Guide on Vacation: Pablo Ospina in Medellin 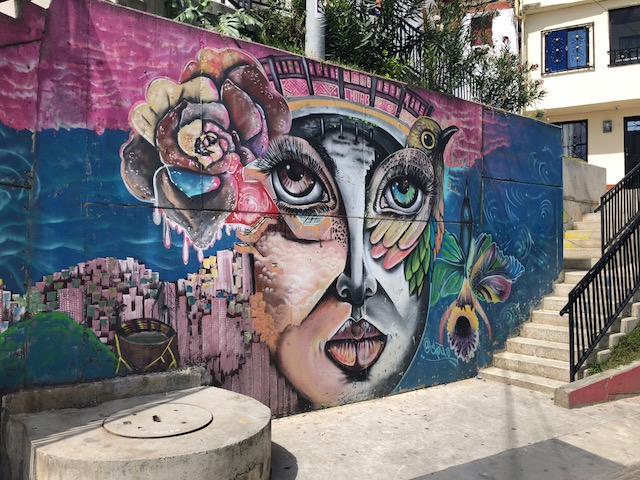 Many clients are obsessed with finding the best lodging within their price range when traveling, as they should be. But equally, if not more important, is the unparalleled value of a good guide. Take Pablo Ospina, who was recommended to me by Latin Excursions, our go-to tour operator in Colombia and other countries in South America. Pablo chose to meet me my first day in Medellin, knowing that the city was on holiday and the traffic was far less than usual (wow, did I realize that the next day when the city was back in swing and it took forever to get downtown). Pablo’s first stop was Comuna 13 to see the magnificent and ever-growing street art in this neighborhood, which not too long ago was one of the most dangerous neighborhoods of South America. While we strolled, Pablo gave me the history of Medellin, this city of 4 million nestled in the valley close to a mile high. When Pablo was growing up, there were car bombs and constant fighting between the government and the guerilla forces of FARC, with the remnants of Escobar’s drug ring thrown in for more chaos. Now the city has rose from the ashes and what a remarkable job it’s doing. Not only is it safe, but it has one of the best climates in the world, 70 to 80 degrees Fahrenheit year-round. Many people are retiring to the city to enjoy the weather and the only public transit system in Colombia, which includes cable cars and outdoor escalators.

When we descended from Communa 13 on the escalators and spotted about 5 tour groups heading up to the street art (we had the place to ourselves since Pablo wisely headed here first), we took a cable car up into the hillside for glorious vistas of the city ringed by jagged peaks. Then it was on to the city center to see the Botero sculptures and his paintings in the nearby Museo de Antioquia. Botero not only donated his impressive sculptures, paintings, and watercolors to his boyhood museum, he bequeathed his collection of contemporary art by Stella, Frankenthaler, and Andy Katz, among others. For lunch, we headed to the large botanical garden in the center of the city and its signature restaurant, In Situ. One sip of the sublime coconut lemonade and that would be my drink of choice throughout the week. After lunch, we strolled the gardens and spotted large lizards amidst the orchids and bamboo trees. Seven hours after picking me up, Pablo dropped me back off at my hotel, the Intercontinental Medellin. But not before outlining what I should do the following day on my own. That’s what you call an excellent guide, one that I will happily recommend for all clients headed to Medellin!