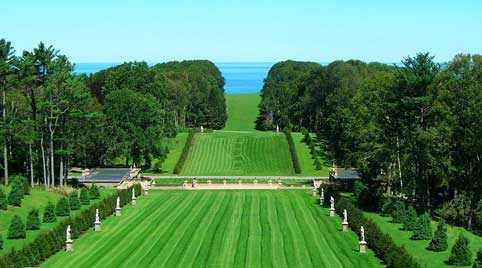 In 1891, Boston landscape architect Charles Eliot received the go-ahead from the Legislature to establish The Trustees of Reservations “for the purposes of acquiring, holding, maintaining and opening to the public . . . beautiful and historic places . . . within the Commonwealth.” Today, the nonprofit conservation organization maintains over 100 sites in Massachusetts and has a yearly membership of more than 125,000 people. Crane Beach and Naumkeag, the recently renovated Stockbridge estate, are two of the crown jewels in the Trustees’ collection. But there are many more unheralded gems. The week of May 16th I’m going to divulge my 5 favorite Trustees sites not to be missed. This will lead up to the statewide anniversary launch on May 21st and “Home Sweet Home” Historic Open House Day. The Great House on the Crane Estate in Ipswich, the Old Manse in Concord, and seven other historic homes will be open to the public for free. An exhibition, From the Sea to the Mountains: The Trustees 125th Anniversary, recently reviewed in The Boston Globe, will be at the Norman B. Leventhal Map Center (NBLMC) at the Boston Public Library through August 28, 2016. Naumkeag will host a garden party on Saturday, July 23rd. And you’ll catch us at the Crane Estate on August 6th to catch Megan Hilty and the Boston Pops Orchestra perform at one of the most majestic spots in the state, the Grand Allée, overlooking the Atlantic. Do yourself a favor and check out at least one new Trustees site this summer. You’ll thank me!