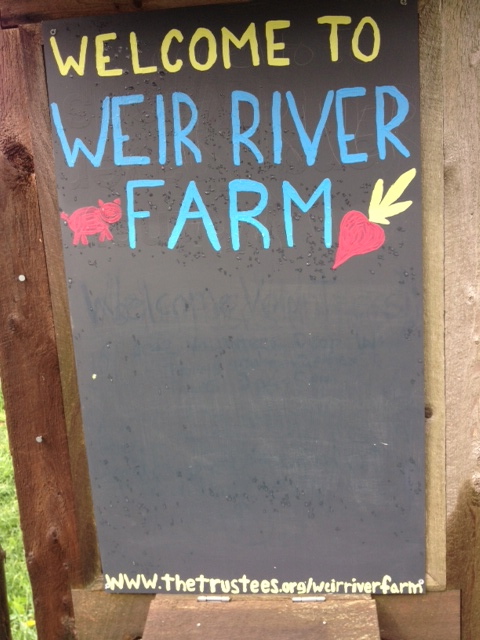 Turkey Hill Lane is an apt name for the road that leads to Weir River Farm in Hingham. On the drive there yesterday morning, I spotted at least a half-dozen wild turkeys. It would prove to be an auspicious start to a glorious day of seeing a small sample of TTOR’s reserves and farms in the southeastern part of the state. Hingham is best known as home to one of the Trustees’ most popular sites, World’s End, a drumlin that juts out onto a peninsula rewarding walkers and bikers with wonderful views of Boston Harbor. Weir River Farm is best known by local school kids for its community farm and 4-H programs. Everyone else will want to take the Thayer Trail, a narrow path on fallen pine needles that leads far away from the South Shore traffic into a tranquil forest full of flowering bushes.

Continuing south, within 5 miles of the Sagamore Bridge to Cape Cod is the Lyman Reserve in Bourne. Like Weir River Farm, it would be wise to download the Google Map to get here or you’ll never find the place. From the parking lot, you have the choice of two trails—one that leads to the shores of Buttermilk Bay and the Cape Cod Canal, the second meanders near a marsh through a thicket of pine to Red Brook. I took the latter trail and was rewarded with views of yellow warblers, great blue herons, and green winged teals.
Heading to Westport Town Farm on one of the most bucolic stretches of road in the state, I passed kayakers and stand-up paddleboarders cruising down the Westport River. The wooden clapboard 1824 house at Westport Town Farm is a welcoming introduction to this pastoral property perched on a hill overlooking the river. Still a working farm, the Trustees donate produce to area hunger relief agencies and hold a weekly Farmers Market on Saturdays in summer. I took a grassy trail past the barnyard onto pasture that slopes down to the edge of the water. All I could hear was the cacophony of birdsong.
My final stop of the day, Slocum’s River Reserve in Dartmouth, was formerly known as Island View Farm. Tall silos stand across Horseneck Road from the parking lot and you still walk through a farmer’s backyard along centuries-old stone walls to get to the pasture and woods that lead to Slocum’s River. As I made my way close to the shores, I could smell the salty air and see the canoe launch. Next time, I’ll make a note to return with a kayak.