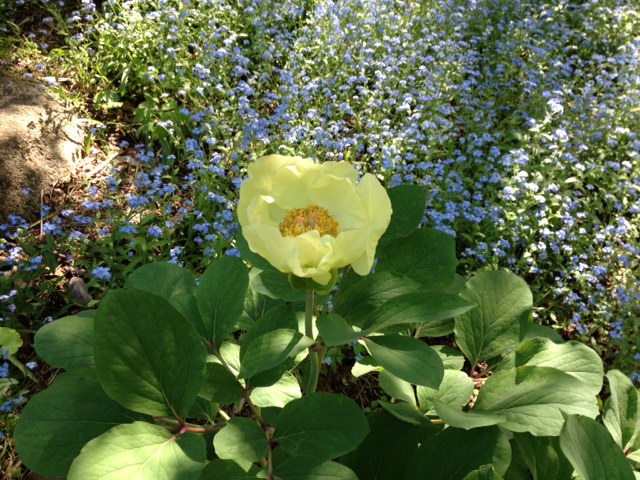 As editor and publisher of the Atlantic Monthly, Ellery Sedgwick worked with some of the finest writers of his time, including Ernest Hemingway and Robert Frost. Yet, it’s his marriages to not one, but two accomplished gardeners and horticulturists that has had far more of a lasting impression. In 1916, Sedgwick moved with his first wife, Mabel, to a 114-acre hillside property in the North Shore. He built a Federal-style brick house and even had the verandah shipped from a former hotel in Charleston. The house sits atop a drumlin staring out at forest, but it’s the incredible gardens at Long Hill in Beverly that will capture your attention.
I was fortunate yesterday to tour the majestic grounds with current horticulturist Dan Bouchard. He tells me that any season you visit Long Hill, there will be something in bloom. Right now, however, there’s an explosion of spring color from the beautiful blue forget-me-nots to exotic Chinese redbud to the soft yellow and very rare Molly the Witch peonies. The assemblage of trees is also exceptional, from the tall dawn redwood planted by Sedgwick’s second wife, Marjorie, to the signature copper beech in front of the house nearing a century old to the eastern red cedars that are native to this land. The needles on the Japanese umbrella pine feel like plastic, the thick bark on the weeping hemlock out of a fairy tale. You half expect a gnome to open a hidden door. That’s how special this place is.
From Long Hill, I headed to Gloucester just beyond Stage Fort Pork to Ravenswood Park. This 600-acre refuge, filled with hemlocks and birches, is popular with local dog walkers and mountain bikers. Similar to Acadia National Park’s carriage paths, Ravenswood has ten miles of crushed gravel that’s ideal for first time mountain bikers. Even on a warm spring day, strolling past the many glacial boulders, I spotted few other people. If you need to escape the Cape Ann crowds this summer, try Ravenswood.
Then I was off to Andover to visit Ward Reservation and climb Holt Hill. The 1-mile round-trip trail brings you through forest and alongside meadows, where you look down and see a labyrinth of old stone walls. Keep on climbing the grassy trail until you reach the short summit overlooking the expanse of Merrimack Valley. Yes, those buildings on the horizon make up the Boston skyline with the Prudential Building standing all the way to your right.
A quick stop to see the tulips at the nearby Stevens-Coolidge Place and then I was driving to the central part of the state to camp overnight at Tully Lake Campground. The Trustees has their own version of March Madness. It’s the time of year when the campsites at Tully Lake Campground are available for reservations. Within an hour, the prime waterfront camping sites on Tully Lake—numbers 7, 16, 20-A, and 31—are pretty much sold out on summer weekends. Come to this tranquil lake where there is little or no motorized boat traffic and tents-only campsites and you’ll understand why campers return year after year. Many bring their own kayaks to paddle to the sandy islands and within narrow Tully River. The Trustees rent their own kayaks and also offer stand-up paddleboarding lessons on Sunday in season, mid-May to late October. Hiking trails lead to Doane’s Falls, where Lawrence Brook tumbles over a series of ledges before it reaches Tully Lake. Ranger Sara leads paddlers to see beavers and Ranger Keith teaches kids how to fish. Also bring your mountain bike, since there’s a 7-mile loop around Long Pond. Tully Lake Campground is one property that people in the know would like to keep a coveted secret.