The Skate Girls of Kabul 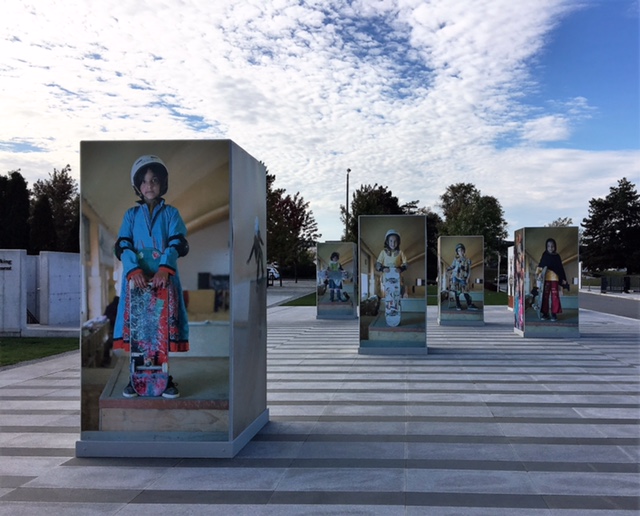 One of the great benefits of living in Toronto, the 4th largest city in North America (after Mexico City, New York City, and Los Angeles) is its diversity. Over 180 languages and dialects are spoken here, and approximately half of Toronto’s population was born outside of Canada. Everywhere I go locally, I learn something about another part of the world. A small but powerful outdoor show at the Aga Khan Museum is a perfect example. On a warm October afternoon, after visiting a pumpkin festival in Markham, Ontario, we stopped to see the amazing photos of the “Skate Girls of Kabul” installation. These young women are participants in an NGO called Skateistan whose mission is “empowering children and youth through skateboarding and education” in Afghanistan, as well as Cambodia and South Africa. In Kabul, sports are off-limits to most girls, but fortunately the skateboard was perceived as a toy, thus allowing them to participate. And, for both genders, many Skateistan programs require an equal amount of time in the classroom as on a skateboard: being taught to skateboard as a way to get students into full-time education. In 2016, Skateistan hit the 50% female milestone. Props to Skateistan founder, Australian skateboarder Oliver Percovich, and to photographer Jessica Fulford-Dobson. The exhibition is on display until October 29th.
Guest Post and Photo by Amy Perry Basseches