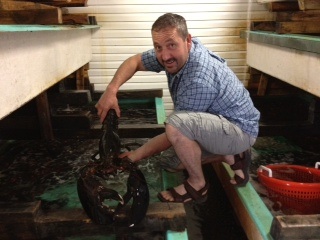 All it takes is a one-minute conversation with Dr. Mathieu Duguay to understand how he persuaded the finest harpsichordists and cellists in Amsterdam, New York, and Berlin to come perform Bach in a 300-seat seat church on the island of Lamèque. A genuine lover of music, Duguay knows the most talented period performers of the day and has flown them over to New Brunswick to play in a church, acclaimed for its exceptional acoustics and vibrantly painted interior. Today, the Baroque Music Festival, now in its 37th season, is the best of its kind in North America.
If you make the wise decision to venture off the Acadian Route and travel on Route 113 to Lamèque and Miscou Islands on the Acadian Peninsula, you’ll quickly realize that Duguay is just one of many colorful characters that light up this sylvan setting. Sandra LeCouteur grew up in the circa-1856 lighthouse on the edge of Miscou Island. Her father, the lighthouse keeper, is known for catching the largest tuna in the world, a whopping 1243 pounds. On select nights in summer, LeCouteur sings on a small stage inside the lighthouse and her deep voice resonates within these historic walls.
Just beyond the Miscou Island Bridge, La Terrasse à Steve is named for the owner, a seafood lover who uses lobster 14 different ways. Sit down at one of the picnic tables overlooking the harbor and dine on lobster casserole, lobster paste sushi, or simply a lobster just out of the pot. Ask if you can see his 13-pound lobster, which is for photographs only. Then write your name on one of the wooden poles, right next to the guy from Alaska. Finally, there’s the seafood pizza at Au P’tit Mousse, written up in Michelin of all places. One bite of Patrick Noel’s sublime combination of lobster, clam, shrimp, and scallop topping and you’ll forgive him for being a Montreal Canadians fan.
Climbing the Miscou Island Lighthouse and looking out over the water, feeling like you’re on the edge of the great abyss, or lounging on the sublime white beaches are the main reasons folks visit the Acadian Peninsula. But spend more than an afternoon here and you’ll realize it’s the people that make this place special.