The Far From Perfect Honeymoon 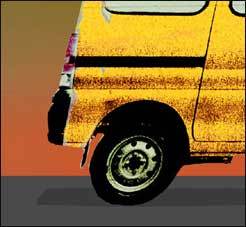 “Goreme? You stop in Goreme?” I asked the bus driver as I pointed to our ticket.

“Yes, Goreme. Coming,” he replied as he continued to drive like a maniac. Something was wrong. We had passed Nevsehir about an hour before, and, according to my guidebook, Nevsehir is only five miles from Goreme, the heart of Turkey’s intriguing Cappadocia region.
“Goreme, we’re going to Goreme!” my wife repeated, nearing hysteria. The driver nodded and grinned.
There was nothing wrong with the guidebook. The driver had indeed sped past Goreme to the next city. Frustrated, we arrived at the bus station there, only to learn that the bus to Goreme didn’t leave for five hours. We got there eventually – seven hours later in the middle of the night.
So much for the perfect honeymoon, the one advertised in glossy bridal magazines with couples strolling hand-in-hand in some European capital, locals having been conveniently blotted out.
All we wanted now was a bed on which to lay our weary heads. Surrounded by barking dogs, we walked up a hill and miraculously found our hotel. Rooms were carved out of the soft tufa rock Cappadocia is known for. But, of course, there was nobody at the front desk. Thoroughly exhausted and borderline delirious, we saw that a door to one of the rooms was ajar. We peeked in . . . the bed was empty. Good night!
Originally published in The Boston Globe, “Writers’ tales of 12 trips gone wrong.”