The Emergence of Schenectady’s Mohawk Harbor 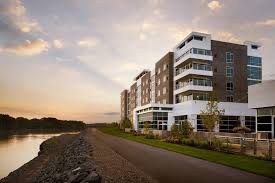 I was back in my boyhood stomping grounds this weekend for a high school reunion and was pleasantly surprised at how good the city looked. Much of the change is due to an influx of investment from the new Rivers Casino & Resort. We stayed at the casino’s Landing Hotel, boasting a stylish lounge bar, outdoor tables around fire pits, and a paved walking path along the Mohawk River. I’ve never seen so much action on the river. Peering out at the water from our hotel room, we spotted fishing boats, jet skis, and countless crew teams skimming the water’s surface. I learned at the reunion that the Niskayuna crew team is one of the best in New York, with many alums being awarded D-1 scholarships at some of the finest college crew teams in the country.
Rivers Casino is building up the whole waterfront in a neighborhood called Mohawk Harbor. We strolled down the path to find a spanking new apartment building and Courtyard by Marriott. Soon to make its debut in retail space at the bottom of the apartment building is the Shaker & Vine wine bar. Also opening nearby is a restaurant and microbrewery, Druthers Brewing. Before meeting friends at two bars owned by former classmates, Katie O’Byrnes and Cappocia Wine Lounge, we had to stop at my favorite Italian restaurant in town, Cornells, to dine on a dreamy eggplant parmesan. There’s a scene in the movie, Ratatouille, where the food critic is immediately transported back to his youth thanks to the perfect rendering of the dish. That’s what eggplant parmesan at Cornells does to me. One bite and I’m 11 years old surrounded by my family, my mother in her thick Bronx accent asking if I need more fresh baked bread to swipe up the heavenly red sauce.
Things are looking up in Schenectady. If you’re passing through on a college tour or hitting the track at Saratoga next summer, I wouldn’t hesitate to spend a night or two at Mohawk Harbor.

4 comments on “The Emergence of Schenectady’s Mohawk Harbor”