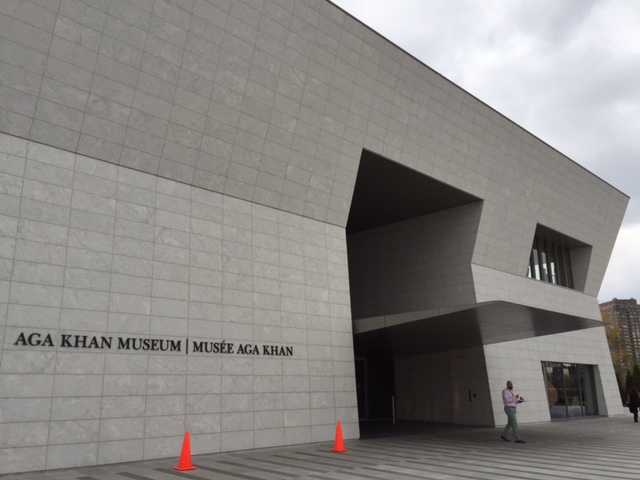 Multiculturalism is the main reason why I return to Toronto as often as possible, a half-dozen times in the past decade. I love the diverse population—chatting to an Eritrean taxi driver about the struggles in her country, dining on sublime dim sum with a Hong Kong-born chef whose har gow (shrimp dumplings) arrives orange thanks to a mix of butternut squash (more on the restaurant Luckee later this week), to shopping for vintage clothing in Little India. So it came as no surprise to me that the Aga Khan Museum, the first North American museum devoted exclusively to Islamic Art, made its debut in mid-September in the northeastern part of Toronto.

Aga Khan, the imam and prince of the Ismaili branch of Shia Muslims, who number some 15 million across 25 nations, spent more than $300 million to fund the museum. His renowned collection of art, over 1,000 pieces that span a millennium, has been on view at the Louvre in Paris and Hermitage in St. Petersburg, but now he has a permanent home worthy of the works. It took 18 years from conception to completion, but the debut of the Aga Khan Museum couldn’t have come a better time. With media constantly bombarding us with all the atrocities happening in the Muslim world, it’s downright therapeutic to walk into an exquisite setting bathed in natural light and be dazzled at the beauty of these objects.
The collection is housed in a building created by the Pritzker Prize winning octogenarian, Fumihiko Maki. Artifacts are displayed on two floors, in high-ceilinged white rooms with teak floors. The galleries are centered around an open-air courtyard, which is open to the public free of charge if they simply want to relax and enjoy a cup of coffee and Turkish sweets. Before viewing the works, walk up the lapis-stone stairway into the auditorium, an explosion of teak wood already starting to garner attention for its excellent acoustics.
New York’s Metropolitan Museum of Art might have a larger collection of Islamic Art, now housed in its new wing, but the Aga Khan has a good eye for objects. The museum is designed chronologically and starts with a blue Koran from 9th century Iran, calligraphy written in gold. The geometric patterns, whether circles found on the 12th-century robe of a Mongol warrior or a 9-pointed star seen in the woodwork of a 14th-centurty Spanish squinch, are mind-boggling. A rare piece of Iznik ceramics from the Ottoman Empire shows how the color red suddenly appeared in the predominantly “blue and white” patterns of the day. My favorite part of the collection was the brilliantly illustrated pages of the Persian epic, Shah-Nameh, a colorful portrayal on each page, which will be turned every three months in order not to damage the manuscript. An easy 20-minute taxi ride from downtown, the Aga Khan Museum is a great addition to the Art Gallery of Ontario, the Ryerson Image Centre, and the other noteworthy art found in Toronto.