The Debut of The Boxer in Boston 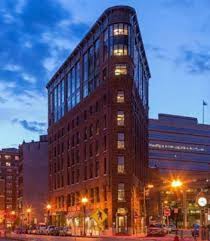 Several ski writers who came into Boston last week for the Boston Ski Show mentioned that they loved their hotel, The Boxer. Formerly the Bulfinch Hotel, the Boxer is a nine-story, 80- room boutique hotel housed in a triangular 1904 building that’s Boston’s version of the Flatiron Building. Located on Merrimac Street, not far from the Boston Garden and the North End, The Boxer has a vintage feel, with an old-time room key rack behind the front desk and a circa 1860 map of Boston on the lobby ceiling. Their restaurant, Finch, serves regional fare like New England clam chowder and lobster mac n’ cheese. Rates start at $161 a night.

2 comments on “The Debut of The Boxer in Boston”