Tastings Menus to Try in Bangkok 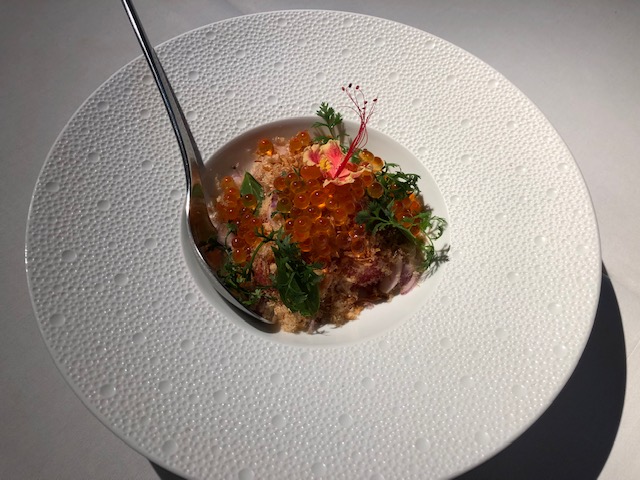 We were hungry as soon as we arrived at our room at the Anantara Siam in Bangkok after our flight from Hong Kong. We scouted out the choices and found that there was a Michelin-starred restaurant called Paste within easy walking distance. It was early Sunday afternoon and we were hoping we could grab one of their tables. Initially, the hostess said no, but as we were leaving, she said they had a cancellation. It turned out to be one of the most memorable meals of the trip, a 7-course tasting menu created by Bee Satongun, who was called the finest female chef in Asia. Each dish was prepared like a work of art on the plate and was the proper size for sharing. But it was the unusual spices that excited the palate. Favorite appetizers included roasted duck, nutmeg, and sawtooth coriander on rice crackers, and tapioca pudding of smoked trout, toasted peanuts, Thai mustard leaf, and wild sesame. Then came a hot and sour soup of crisp pork leg, roast tomatoes and fried garlic in a smoky chicken broth before the sublime entrees arrived. Laos Duck Curry was a highlight. The next dish was equally tasty but I had no idea what it was. Here’s what it said on the menu: "Southern Thai-Muslim origin. Kimmedai, saffron, in-house made curry powder and nutmeg. Fried off in ghee, served with pickles and cured catfish eggs." Say what? It’s actually a type of fish.

The last night in town, friends had recommended Issaya Siamese Club to celebrate Lisa’s birthday. Set in a Colonial-style plantation house, you dine in separate rooms on couches, like being in a relative’s house. We were sitting in front of an RCA television, circa 1960s. Once again we ordered the Tasting Menu and, while it wasn’t nearly as innovative as Paste, it still was very tasty. We started with mojitos in tall chilled glasses and dined on a palm salad before diving into entrees like a full lamb shank, tender off the bone, served in a tangy curry sauce. We were told to order the "Broken Bucket" for dessert and that’s what I’ll remember years to come. A woman arrived with dry ice to create an abstract concoction of goodness, replete with smoke, white chocolate, and coconut sorbet. What a festive way to end our trip!