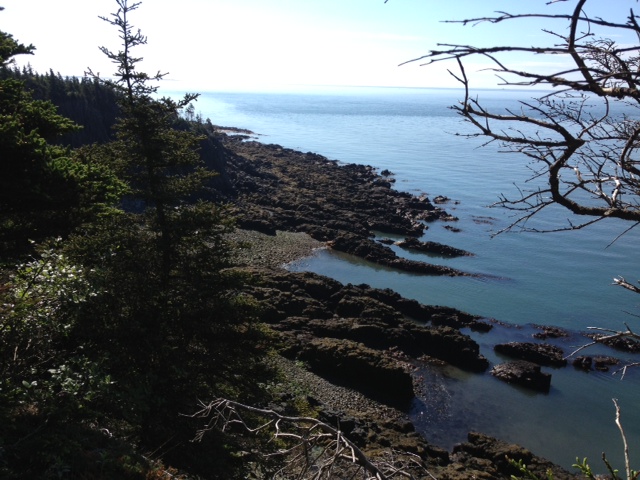 I’m not sure why I waited so long to visit Grand Manan Island. Perhaps because the ferry to the island runs from New Brunswick, though it’s much closer to the Maine shoreline. Thankfully, I finally made it to Grand Manan June 2014 and I could have easily stayed another week or two. I made the wise decision to stay at the Inn at Whale Cove Cottages, perched on a bluff overlooking a sheltered bay. The talented owner and chef of Whale Cove, Laura Buckley, whipped up a tasty meal when I arrived that included a creamy mushroom soup, almond crusted salmon, and an absurdly good sour cherry pie.

I sat next to a large group who return to Grand Manan year after year for the past 30 years. They recommended I climb back in my car after dinner and drive to the end of Whistle Road past the lighthouse to a spot locals simply call “The Whistle.” Wow, what a tip! Perched on a bluff overlooking the rocky shoreline, I spotted kids scouring the boulders for that nutritious New Brunswick seaweed treat, dulse. To my left, cliffs plummeted to the shores below, and directly in front of me was the great expanse of sea leading to FDR’s former summer home, Campobello Island, and the Maine towns of Lubec and Eastport. Within moments of arriving, I spotted seals in the water and shortly thereafter, the graceful arc and fin of the minke whale. The sun was setting, the whales were slicing the water, and local old-timers were handing me Moosehead Light beers. My first night on Grand Manan and I understood the magical allure.
The following morning, I drove along lupine-lined roads to the southern tip of the island, the start of a glorious hike atop a bluff that led from the Southwest Head Lighthouse to a distinctive coastal rock formation locals call Flock of Sheep. The narrow trail snaked over roots and moss though a forest of twisted krumholtz and dwarf pines that cling precariously close to the cliff’s edge. I spotted lobstermen in the distance, but it was the exquisite shoreline that grabbed my attention. Usually, I sprint to the finish of a hike. This time I sat on several benches made of makeshift wood to drink in the stunning view. What’s the rush? It’s that image that I remember so vividly this morning and why I decided to send readers a reminder to visit Grand Manan.