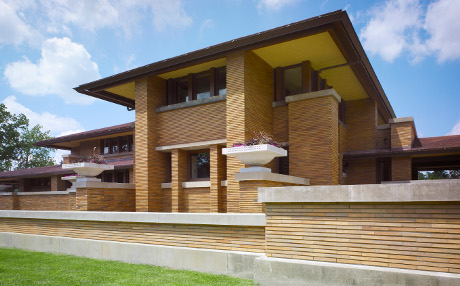 At the turn of last century, Buffalo had more millionaires per capita than any city in America. The combined wealth helped persuade Louis J. Sullivan, Frederick Law Olmsted, and Frank Lloyd Wright to come to town to create skyscrapers, parks, and estates. Then the city fell on hard times. But it seems like Buffalo is having the last laugh. Money is staring to pour in to salvage many of their architectural highlights.
I was in Buffalo this past weekend, on assignment for The Boston Globe, and I had a great stay. Wright’s Darwin Martin House (1905), rivaled only by Fallingwater in scope and mastery among his residences, just completed a 10-year, $50 million renovation. This includes the renovation of a conservatory and carriage house, linked to the main house via a 100-foot long pergola. This was my third tour of a Wright house, include Taliesen West, and was by far the most impressive.
On an open-air bus architectural tour, we also checked out the former Buffalo State Asylum for the Insane, a castle-like assemblage of 14 buildings designed by H.H. Richardson in the late 1800s. The gothic-looking towers have been rebranded the Richardson Olmsted complex and will soon become a boutique hotel and center for architecture. Other noteworthy stops include Louis J. Sullivan’s 13-story 1895 Guaranty Building, the first skyscraper in America, and the Albright-Knox Art Gallery, considered one of the finest collections of modern art in the country.
The food was exceptional. On the first night we had inspired Polish fare at Bistro Europa, including pierogies and golabki, stuffed cabbage that would make my grandmother proud. The second night, we dined at the spanking new Mike A’s Steakhouse in a downtown building that was dormant the past 40 years. Saved by Buffalo’s favorite son, developer Rocco Termini, the circa-1904 Lafayette Hotel has reclaimed its French Renaissance and Art Deco glamour and is now a boutique hotel with a vintage bar. Dinner was exceptional, probably the best meal I had since dining at the acclaimed Next in Chicago last summer. Mike Andrzejewski is one of the city’s best loved chefs and he finally has a high-end restaurant that matches his talent. One taste of his wagyu beef tartare, spiced with pine nuts, capers, watercress, red onions, olive oil, truffled dijon mustard, and egg yolk, and you realize this dude’s destined for a James Beard Award.