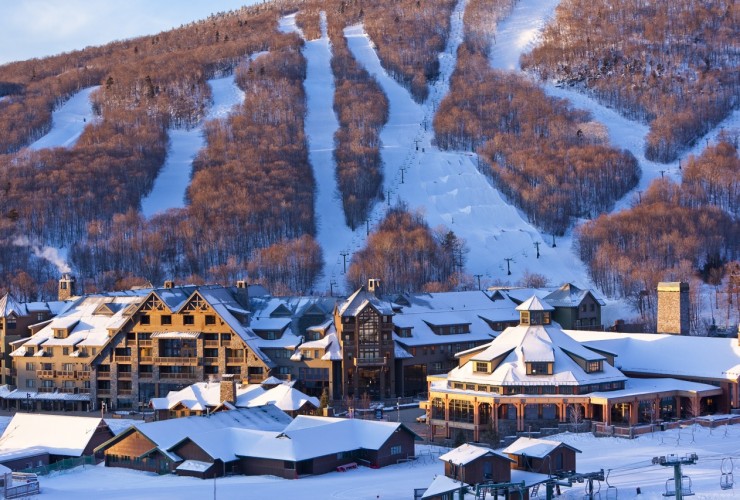 One of the main reasons I gave Stowe top billing in this month’s Yankee Magazine cover story on New England’s top winter towns is due to the creation of Stowe Mountain Lodge. The most sybaritic ski-in/ski-out resort in New England, the 312-room Stowe Mountain Lodge has the feel of a ski lodge in Jackson Hole, especially when you enter the lobby with its towering two-story high ceiling. The resort uses indigenous wares everywhere you look, so there’s real Vermont birch twisting around the columns and Lake Champlain marble on stairs leading to the après-ski bar, Hourglass. They have been on a serious building spree since their inception, creating 36 holes of golf, a stylish spa with heated outdoor pool in winter that rewards you with views of the mountain you just conquered, and the Spruce Peak Performing Arts Center.
Having just spent the weekend with the family at the resort, I was excited to see the latest changes. A skating rink has opened behind the property near a branch of the popular Burlington creperie, Skinny Pancake. Behind the skating rink, construction workers were hard at work atop a new building that when complete in March will feature a climbing wall and recreation center for kids, along with 19 new condominiums (all sold out). Next door is another new wooden building with large stone chimney in the center that will soon transform into a wine bar. On Saturday afternoon after a day of skiing, kids were making s’mores around fire pits outside as adults swigged their Switchback Ales at the Hourglass bar. The place was a buzz of excitement as a world class ski-in/ski-out resort should be.