Stocking Stuffer No. 5: A Night at Mystic’s Spicer Mansion 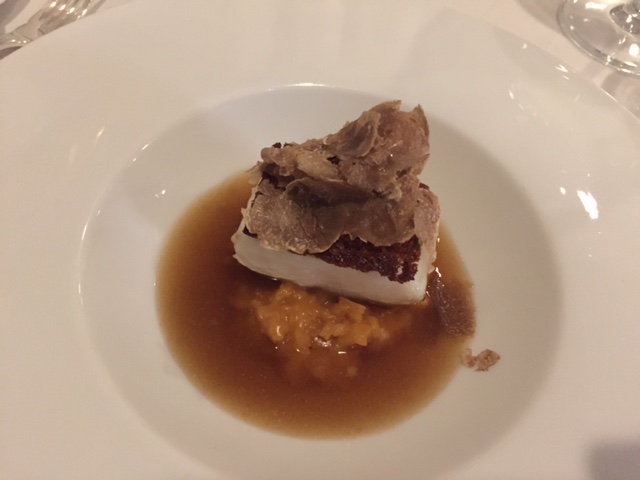 One foot into inside the Rose Salon of the Spicer Mansion and I was smitten. The fresco ceiling, inlaid wood floors, moldings, and original windows had all been lovingly restored to its 1853 origin. But it wasn’t until dinner that evening that I realized why this new 8-room inn perched on a hill overlooking Mystic had achieved Relais & Chateaux status. The meal started with canapés and cocktails in the Rose Salon, before moving past the small kitchen to the intimate dining room for our six-course feast. An East Beach Blonde Oyster spiced with cider and green chile whet my appetite for more to come. Next up was a beautifully presented Nantucket bay scallop ceviche with slices of radishes and sweet potato in a small colorful bowl. The third dish was a stunner, native cod doused in a porcini mushroom and lobster broth and topped with genuine truffles. Then came a tender Vermont quail under a bed of pistachios, pomegranate, and barley, perfectly paired with the Antica Terra “Ceras” pinot noir from Willamette Valley. Dessert was a cinnamon-spiced apple with a dab of maple cream, paired again brilliantly with the sherry-like Marco de Bartoli Superiore Oro from Sicily. Last but not least was a wooden jewel box filled with macarons and homemade goodies created by the staff.

Remember the name of the chef, Jennifer Backman, because she’s on her way to winning many accolades. Indeed, I would have to say this was my favorite meal of the year and that includes stops at Shaya in New Orleans, the best new restaurant in America according to the James Beard Awards, and Pot Luck Club in Cape Town, often mentioned as the top restaurant on the African continent. Chef Jen’s signed menu is now pinned to the wall of my office, next to another memorable dinner, “Paris 1906” at Grant Achatz’s Next in Chicago. The best part of the meal is that we could simply walk upstairs to our room. Want to impress your loved one this Holiday Season? Make the splurge and book a room and dinner at the Spicer Mansion.