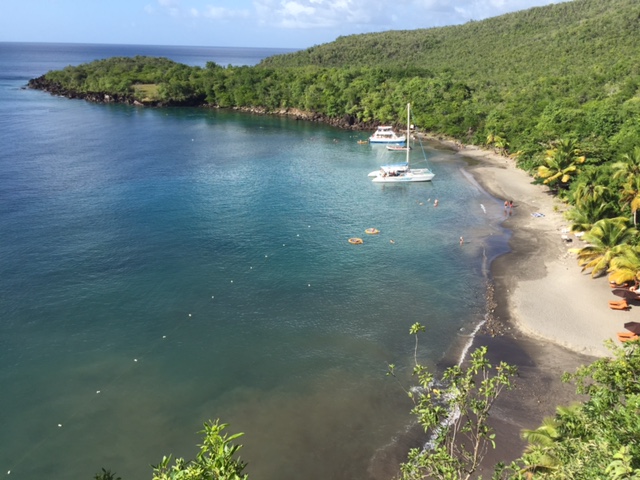 Take it from a travel writer who’s been penning stories since 1990—rarely is a day on the road seamless. I wouldn’t say I’m jaded, just realistic. There always seems to be some problem, whether it’s traffic congestion, the lodging not living up to those over-hyped TripAdvisor reviews, the adventure a bit too touristy and not feeling authentic. Then there’s days like yesterday where everything is perfect and this job is sheer bliss.
My driver Vaughn is a delight, passionate about the history and people of this island. So much, in fact, that he left Brooklyn after 6 years and returned to St. Lucia to make his mark. He picked me up and drove me to the lush western side of the island, home to the largest banana plantation on the island, a rum distillery, and fishing villages like Anse La Raye, known for its seafood street festival held every Friday. At an overlook peering down at picturesque Marigot Bay, where Mick Jagger and Oprah both own homes along the waterfront, we walked into a nearby store to sample banana ketchup, hot pepper spices, and spiced rum with grenadine.
Less than an hour later we made it to Ti Kaye, a boutique resort nestled into a hillside above a glorious strip of secluded beachfront. I would soon find out that the best part of the resort is the bay next to that beach called Anse Cochon. I threw my bags down in my room, changed into a swimsuit and practically flew down the 165 steps to the gray colored beach, a mix of volcanic black sand and the usual white sand from the coral. I grabbed an ocean kayak and was soon paddling down the western shoreline past cliffs where vines clung precariously to the top, deserted beaches which I’m sure honeymooners staying at Ti Kaye have taken full advantage of, and a green velvety hillside that led to jagged mountainous ridges. I can’t tell you how liberating it is to grab a kayak and take a paddle just by your lonesome down this unpopulated stretch of coastline. The only person who passed me during the 2-hour paddle was one fisherman.
Back at Ti Kaye’s beachfront bar, Ti Manje, I ordered the smoked marlin salad, slices of fish topped with mixed greens, tomatoes, corn, and a chipotle dressing, washed down with freshly made ice tea. Waves pounded the restaurant as I watched scuba divers take the plunge into Anse Cochon. You want to know one of the most cherished spots for all those scuba diving and snorkeling boats? Yes, this exact spot, which is a preserved marine sanctuary. Avoid the boat traffic in the mid-morning or mid-afternoon and the place is yours. I grabbed snorkeling gear, walked to the far end of the beach and soon was swimming in a natural aquarium of neon-colored fish including parrotfish, the multi-colored queen angelfish, and the bright blue chromis. I also loved seeing fan, organ pipe, and brain coral that was very much alive.
Afterwards I washed off in my outdoor shower and relaxed in the hammock on my porch, where I now relax after another hard day of work.