Spending the Night on Grape Island 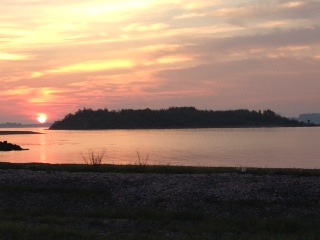 My only experience with the Boston Harbor Islands was visiting the Civil War-era fort on Georges Island and walking the trails of Spectacle Island, mostly formed from the dirt unearthed during Boston’s Big Dig. Last Thursday, however, I spent the night on Grape Island, one of the four islands in the harbor that offers camping. Only a stone’s throw from the mainland and the town of Hingham, you feel a world away on this 50-acre forested outpost. We kayaked around neighboring Slate Island with a ranger, ran into a 10-point buck and several doe, watched the sun set over the Boston skyline, and built a bonfire on the beach. There were only 10 sites on the island, and people in the know booked the sites months in advance at ReserveAmerica.com. It’s primitive camping with no running water available, but it’s great to be out on the water for a night or two, smelling the salty air and seeing Boston from a different viewpoint.