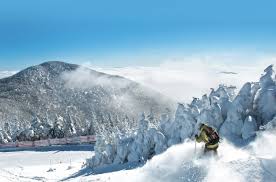 It was unusually cold in Boston this weekend, which is good for many of the ski areas in New England that are now open. First on my wish list this season is Jay Peak. Over the past 8 years, the northern Vermont ski resort opened the 176-room Hotel Jay, the largest indoor waterpark in Vermont, an indoor skating rink for ice skating and hockey games, the Stateside Hotel and base lodge with restaurants and locker rooms, a rental center, 84 new mountain cottages, and a complete redo of the resort’s entrance. Most of the funds used to revamp the resort were collected through an elaborate EB-5 program, where international investors were offered green cards if they invested $500,000. Then in April 2016, a federal lawsuit accused the owners of misusing $200 million raised through the EB-5 program in a Ponzi-like scheme for other projects and their own personal use. Many folks in the ski world thought Jay Peak would shut down once the owners were arrested, but Jay was placed in federal receivership and all employees were told to stay on. They even continued with their construction plans and opened a new theater this summer. What we have now is a world-class ski resort that receives more annual snowfall than any other area in New England, often in excess of 400 inches. I’m ready for a return trip, having last visited when they opened their indoor water park in 2012.