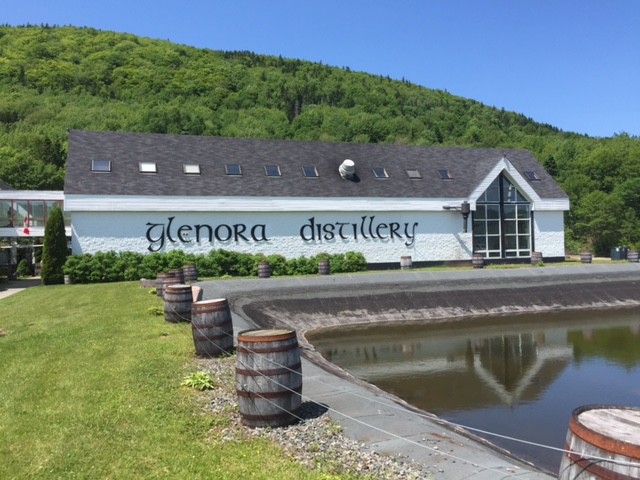 It’s wonderful to be back in Cape Breton, especially on a hot cloudless sunny day. After crossing Canso Causeway and following Route 19 on Ceilidh Trail, we picnicked on the rocks of the Celtic Shores Coastal Trail, a hard-packed gravel trail which snakes along the western shores of Cape Breton from Port Hastings all the way north 92 kilometers to Inverness. In Glenville, we stopped at the Glenora Distillery to sample the single malt whisky (can’t call it Scotch since we’re not in Scotland). We stepped into the bar and listened to the live Celtic music from local fiddlers and singers while sampling a flight of five whisky choices. The Glen Breton 10 year-old whisky was smooth, but we loved the 19 year-old cask strength whisky finished in a barrel used for ice wine to add a hint of sweetness at the end. Then we took a tour around the distillery to see how they produced 150 barrels of whisky this past year. Built in 1990, Glenora is the first distillery in North America to attempt to make single malt scotch. The water stems from the shimmering McClellan’s Brook which runs through the bucolic property, while the malted barley comes from Saskatchewan and the fast-acting yeast from South Africa. The finished product is aged in oak barrels from the Buffalo Trace bourbon distillery in Kentucky.  The result is award-winning single malt whisky, worthy of a stop.