September is the Perfect Time to Visit the Finger Lakes 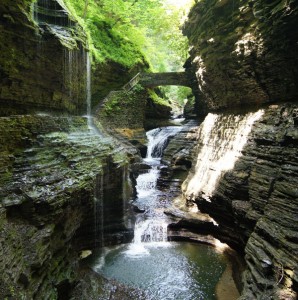 Known for its award-winning Rieslings, the Finger Lakes deserve its reputation as one of the best spots in America to go wine tasting. Yet, its mix of rolling hills and lakes also lends itself well to adventure, especially in September when the summer crowds are gone. At the southern end of Seneca Lake, we hiked alongside a handful of waterfalls in the famous gorge of Watkins Glen. The next morning, my wife and I kayaked through a cattail-laden marsh and saw countless herons, turtles, and a beaver. Talk about adventure—a 40-pound carp jumped out of the marsh and slammed against my arm as I shrieked. But my favorite part of the weeklong trip was a quiet bike ride along a peninsula that juts into Keuka Lake. Start your ride from Keuka College and follow East and West Bluff Roads as they pass the small waterfront cottages with cute names like Hide N’ Seek. There’s one killer hill on the 20-mile ride that takes you atop a bluff, before cruising downhill back to the college. Afterwards, we rewarded ourselves with a lobster roll and glass of semi-dry Riesling at Heron Hill’s outdoor café. We were fortunate to book the next two nights at the Black Sheep Inn in Hammondsport, on the northern tip of Keuka Lake. Owners Debbie Meritsky and Marc Rotman spent over 6 years refurbishing the rare octagonal-shaped house, which celebrated its 150th birthday in 2009.