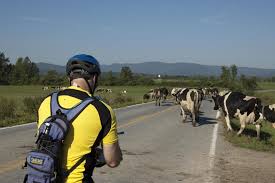 For riders looking for a little inn-to-inn action this summer, it’s never been cheaper to bike in New England. Two outfitters, Bike the Whites in New Hampshire, and Country Inns Along the Trail in Vermont, are offering three days of riding for as low as $379 per person. What does that money get you? Detailed maps depending on you ability, from 20 to 80 miles a day, emergency roadside assistance, two nights lodging, two dinners, two breakfasts, and transport of your luggage from one inn to the next. Country Inns has rides in several of my favorite spots in Vermont, including Addison along Lake Champlain, where you spend the night at the Barsen House Inn. See the story I wrote on biking with Country Inns Along the Trail for The Boston Globe.