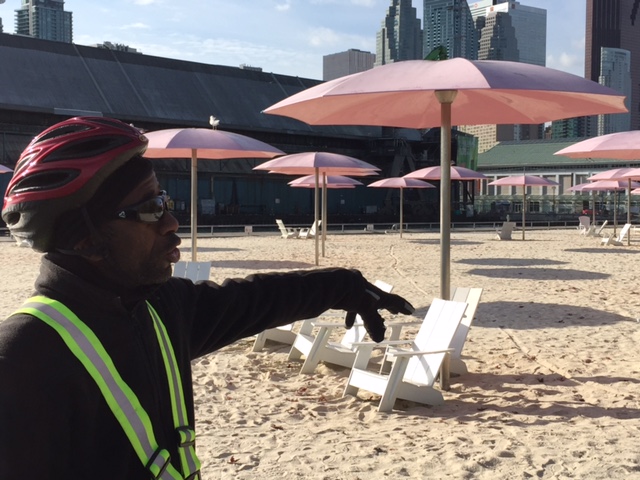 One of my favorite excursions lately is to get an overview of a city on a guided bike tour. In a short amount of time, you can see a good chunk of the city, learn about the history of the locale, visit intriguing buildings and public art only a local would know, ask for a list of recommended restaurants, and yes, get a decent workout. In the past two months, I had great rides in Reykjavik and Portland, Maine. So when I heard that Toronto Bicycle Tours was still offering their 4-hour, 10-mile “Heart of Downtown” ride in mid-October, I was in.

It was crisp, sunny autumn day when I met my guide, Terrence Eta, got adjusted to my hybrid bike, and threw on my helmet. He started with an overview of the city’s British heritage at stately Osgoode Hall, one of the oldest buildings in the city, built in 1832. Then it was on to the urban plaza, Nathan Phillips Square to view the new and old city hall, and Eaton Center, the busiest mall in Canada. We cruised into Old Town, known for its distinctive yellow brick, to stop at the circa-1903 King Eddy hotel, now the Omni King Edward Hotel. Terrence mentioned that in 1964, the Beatles stayed here on their first trip to Toronto. It also caused another commotion that year when Elizabeth Taylor and Richard Burton rented a suite together–while married to other spouses.
A short pedal led to the Financial District and skyscrapers designed by starchitects I.M. Pei and Mies van der Rohe. Then we cruised past the St. Lawrence Market, named the number one food market in North America by National Geographic (try the classic peameal bacon sandwich at Carousel Bakery) and into the Distillery District. In the 1870s, this was the largest distillery of whisky in North America. Today it’s home to microbreweries like the local favorite, Mill Street, art galleries, restaurants, and the beloved chocolatier, Soma. Next stop was Sugar Beach on the Lake Ontario shoreline, named for its proximity to the massive Redpath sugar refinery.
A quick stop below the CN Tower to peer up at the intrepid Edge Walkers, before we circled the Rogers Centre, home to the Toronto Blue Jays, and cruised along John Street to Grange Park. This is one of the special spots in the city, where you’ll find budding photographers snapping pictures of the backside of the Art Gallery of Ontario, with Frank Gehry’s signature staircase jutting out of the building, and the storied “Tabletop” building to the right. Then we checked off Chinatown at the corner of Spadina and Dundas, the vintage stores and coffee shops at Kensington Market, and the ethnic restaurants that line Baldwin Village. Few know the city better that Terrence who grew up here and went to the University of Toronto, and it showed. Highly recommended!