Say No Mas to Cancun 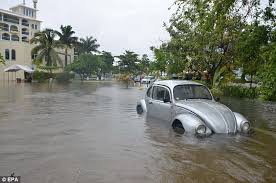 n 1974, a team of Mexican government computer analysts picked a long sliver of land on the Atlantic shoreline as the country’s next Acapulco. The powdery white sands and turquoise waters, separated from the mainland by a lagoon were ripe for development.  Sheraton, Hilton, and Marriott swiftly built their hotels, soon joined by upscale Ritz-Carlton and the flashy Le Meridien, and Americans took the bait wholeheartedly. Today, Cancun is the number one tourist destination in Mexico. Sadly, however, the Mexicans catered far too much to their northern neighbors. With a Hard Rock Café, Planet Hollywood, Rainforest Café, Outback Steak House, and a McDonald’s or shopping mall on every other block, the 14-mile-long Zona Hotelera (Hotel Zone) looks much more like Miami Beach than any Mexican village. In fact, the Cancun version of the Miami Herald arrives at your hotel doorstep each morning. Roads are often flooded and prices for dinner are exorbitant in a country known for its affordability.

But what really upsets me about Cancun is that a mere hour’s drive is the authentic Yucatan. The mega-resort sprawl on the coast leads to Playa del Carmen, once a sleepy outpost favored by European backpackers and scuba divers. You’ll have to hit the ruins and village of Akumal before you can snag a bungalow on the beach that feels genuine. If you really want to savor a slice of the Yucatan rich with history and culture, head inland to Merida. Here, you’ll find the oldest cathedrals on the North American continent, even a mangrove swamp that is home to a colony of pink flamingoes. South of Merida is some of Mexico’s finest Mayan ruins on the Puuc Route. The rounded pyramid at your first stop, Uxmal, stands majestically on high ground. Kabah is known for its almost maniacal façade of 250 Chaac sculptures that line one wall. Walk past the wild turkeys and brilliant red birds in the forest of Sayil to reach its grand palace. Whatever you do, don’t waste your time in that Disneyesque version of Mexico, Cancun.