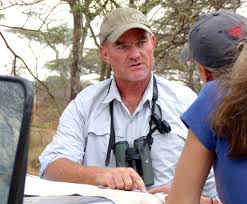 In March 2015, I had the privilege of traveling with Rob Barbour around northern Tanzania, with stops in Arusha and Arusha National Park, the southern Amboseli plains, Mwiba Wildlife Reserve, Ngorongoro Crater, the Ngorongoro Conservation Area, Kusini Camp in the southern Serengeti, the Grumeti Wildlife Reserve, and the Lamai section of the northern Serengeti, where the legendary wildebeest migration takes place across the Mara River. Rob not only serves as director of African operations for the safari operator, Epic Private Journeys, but he’s a native Tanzanian who formerly owned his own lodges in Lamai and Ruaha National Park in southern Tanzania. It seems like every restaurant, hotel, and airport stop we made, he ran into an old friend. What was invaluable to me was the wealth of information he shared on taking a safari in Africa, knowledge accumulated over a lifetime.

Now Rob is taking his expertise to Ethiopia, April 15-28, 2018. The 14-day adventure involves a range of accommodation styles and modes of transport, including trekking in the high plateaus of the Simien Mountains and the Bale Mountains. Ethiopia offers a diverse cultural experience from the Coptic Christians and medieval rock hewn churches in the north to the remote tribes of the Omo Valley. The country is also home to incredible wildlife including endangered Ethiopian wolves, Bale monkeys, Geladas and the Walia Ibex. Please contact ActiveTravels for pricing if interested.