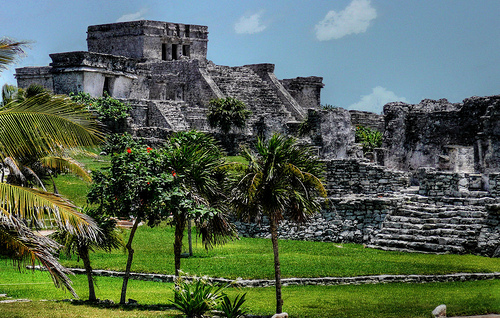 Follow my cue and wake up with a morning snorkel to the reef just beyond the beach of the Riu Palace Peninsula. Simply grab a mask, snorkel, and fins from the watersports hut and off you go to see the neon-colored fish. This being Cancun, the ocean beckons and the Riu takes full advantage of its waterfront location with a slew of activity. Certified scuba divers can head via boat 20 minutes to the east to find a live coral reef and two shipwrecks from World War II. Those who want to sail or paddle can easily grab a Hobie catamaran and open kayak from the beach. Yet, this being Cancun, the gateway to the ocean and the Yucatan peninsula, there’s so much more. The Riu can arrange daytrips to snorkel the natural aquarium, Xel-Ha, or the marine park of nearby Isla Mujeros. There’s the opportunity to deep-sea fish on private charters to hook marlin, sailfish, and tuna. You can even rent a small speedboat and cruise the mangroves in the Cancun lagoon.
Then, of course, there are the Mayan ruins on the beach of Tulum, which will be particularly enticing this week as thousands gather to commemorate the Mayan Day of Destruction on December 21st. The well-preserved Tulum ruins, 60 gray-black buildings in all, are perched on a cliff directly above a palm-fringed beach. Archaeologists place the beginnings of Tulum somewhere between 700-1000 A.D., a period when the Mayan civilization had already passed its peak. Don’t miss Tulum’s tallest building, a watchtower fortress overlooking the Caribbean that the Spanish called El Castillo. The staircase to the summit’s temple offers good views of the seas. Then take a refreshing dip in the ocean before the drive back to the Riu Palace Peninsula.