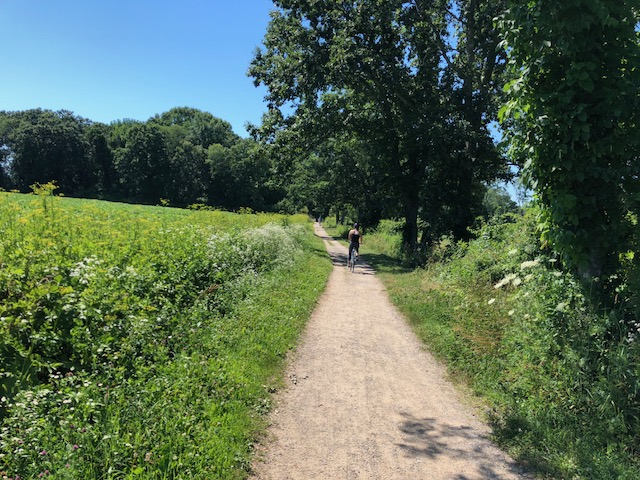 In May, I wrote a road trip story for Chevrolet’s New Roads Magazine on Revolutionary War sites. I visited Minute Man National Historic Park in Concord, Massachusetts, Saratoga, and Valley Forge. What I realized was that all of these Revolutionary War battlefields offer exceptional biking opportunities. In Saratoga, a friend told me that the 10-mile park loop is part of a popular Sunday ride for bikers in the region. In Valley Forge, the rolling terrain is so ideal for bikers that they offer rentals. The bloody Battle Road from Lexington to Concord, which marked the start of the Revolutionary War on April 19, 1775, is now a great ride through the farmland to historic North Bridge, where local militia first confronted the large British regimen. I was so impressed with the riding at Minute Man National Historic Park that I returned with the family yesterday. We first went inside the Visitors Center where a 30-minute film gives a good overview of the remarkable events that occurred on April 19, 1775, the official start of the Revolutionary War. Battle Road is now an 8-mile ride through the rural countryside past the site where Paul Revere was captured by the British (they took his horse but surprisingly let him go). Extend your ride to swim at nearby Walden Pond like we did.