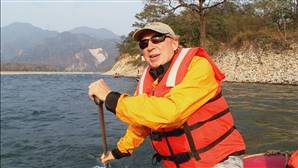 In 1973, Richard Bangs co-founded Sobek Expeditions and almost single handedly put the sport of white water rafting on the map. Sobek was the first outfitter to descend Chile’s Bio Bio River and Zimbabwe’s Zambezi River, now considered classics. In 1991, Sobek merged with Mountain Travel to form one of the premier adventure companies in the world. Now Bangs has joined forces with another renowned rafting outfitter, OARS, to guide a trip down Costa Rica’s Pacuare River. From July 10-16, join Richard and his son Walker as they raft the Pacuare, then head to Tortuguero National Park on the Caribbean coast. With its maze of waterways, Tortuguero is often called the Venice of Costa Rica. From mid-spring to late summer, four different types of turtle return to shores to lay their eggs, including the giant leatherback, which can weigh over 1,000 pounds. Cost is $1780 per person and you can book at 800-346-6277.