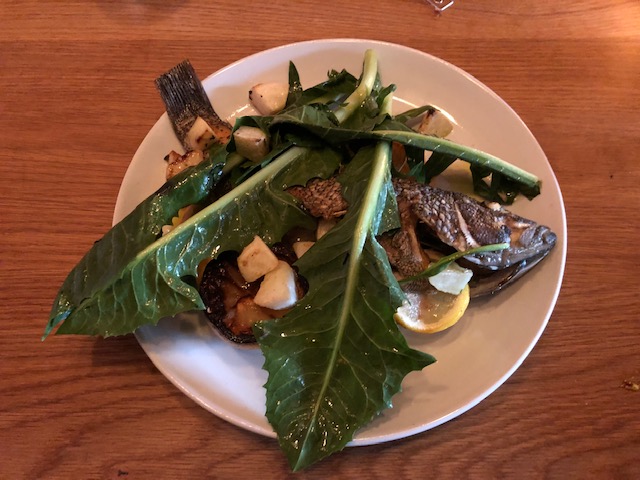 Located on the burgeoning Washington Avenue neighborhood in Portland, Drifters Wife has had a loyal following since its debut in 2016, two years prior to Bon Appetit Magazine naming it one of the country’s top 10 new restaurants. But now it’s so popular that food writer Alex Hall noted in yesterday’s Boston Globe “that in July, you’ve got a better shot at getting your kid into Harvard on a full scholarship than walking in and nabbing a table at Beard Award-decorated favorites like Fore Street or Drifters Wife.” You can reserve a table 30 days in advance, which is exactly what we did for a dinner this past Saturday, when we knew we were spending a night in Portland after our visit to Acadia National Park with friends. Those friends are from Laguna Beach, California, home to one of the best farmers markets on the West Coast. So they’re accustomed to getting a vast assortment of fresh vegetables year round. Maine, of course, has a much shorter growing season, but what Drifters Wife finds locally was more than enough to blow us all away. The choice of appetizers and entrees are limited, 4 or 5 appetizers and 3 entrees. But all were exceptional, from starters of grilled shishito peppers and a zesty arugula salad to entrees of a whole black bass and a tender chunk of hake with a clam sauce. Wash it down with one of their natural wines or a bottle of Peeper from Maine Beer Co. Then finish off the memorable meal with a dish of milk pudding topped with pistachio chunks called Malabi. Sublime.