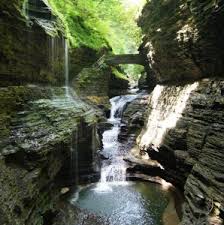 Tomorrow, I’m heading to Ithaca, New York, to drop Jake off at Cornell University for his first semester of college. To relieve the impending void of not seeing my son everyday, I plan to immerse myself in the landscape of the Finger Lakes. Known for its award-winning Rieslings, the Finger Lakes deserve its reputation as one of the best spots in America to go wine tasting. Yet, its resplendent beauty also lends itself well to adventure. This is a pastoral region of New York State, where farmland rolls to bluffs high above the long lakes and waterfalls plunge down the many gorges. At Watkins Glen, I’ll hike amidst the canyon walls and watch the powerful surge of water. Watkins Glen is at the southern end of 38-mile Seneca Lake, an ideal place to go on a sunset sail aboard a schooner. The next day I’ll head to nearby Keuka Lake and bike the 20-mile Bluff Ride that starts at Keuka College on a quiet peninsula jutting out into the water. For a final taste of the countryside, I’ll paddle the same river that inspired Mark Twain, the Chemung. Vineyards surround all of the lakes, so after my day of adventure, I’ll reap the rewards and yes, drown my sorrows.